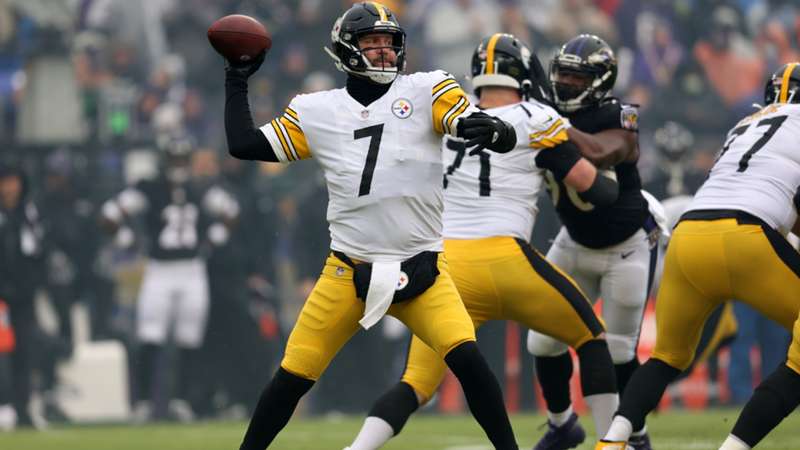 NFL is live on DAZN in Canada only

The Pittsburgh Steelers look set for the playoffs after beating the Baltimore Ravens 16-13 in overtime.

Judging by the first two quarters at a wet and windy MT&T Bank Stadium in Maryland, no one expected this game to blossom into life like it did in the second half and go to overtime. The stakes were heightened in overtime once the Jaguars' 26-11 win over the Colts was confirmed, a win for either team, and the playoff beacon still shines bright.

Lining up in the Maryland wind and rain, Chris Boswell made the kick and kept the playoff dreams in Pittsburgh alive with a 16-13 win. As long as the Sunday night game between the Las Vegas Raiders and Los Angeles Chargers doesn't end in a tie, the Steelers will be experiencing postseason football once again.

Despite winning the toss, the Ravens failed to make it count and were forced to punt, giving the Steelers the ultimate trump card. All they needed to do was score a TD or field goal to win the game.

Driving from their own 17, it looked like at one stage, the curtain was falling on the Steelers' playoff hopes when they faced 4th & 8 on the Ravens 41. A 60-yard field goal wasn't in Boswell's remit, but Roethlisberger wanted to leave one last mark on a team he has faced more than most in his career.

A 10-yard pass to McCloud, followed by a 15 yard run by Najee Harris to the Ravens 16, all but gave kicker Boswell an easy shot at glory. Lining up in the Maryland wind and rain, Boswell made the kick and kept the playoff dreams in Pittsburgh alive with a 16-13 win. As long as the Sunday night game between the Las Vegas Raiders and Los Angeles Chargers doesn't end in a tie, the Steelers will be experiencing postseason football once again.

Both offenses were struggling to put together drives in the opening stages of the game. However, after the Pittsburgh Steelers took the lead in the first quarter through a Boswell field goal, it seemed like Mike Tomlin's team was slowly gaining control.

Ravens quarterback Tyler Huntley's pass intended for Mark Andrews was intercepted by Terrell Edmunds with just four minutes remaining in the first. Ben Roethlisberger, who was potentially playing his final game as a Steeler, also had a pass intercepted by Geno Stone in the closing stages of the first.

The Steelers led 3-0 going into the second quarter, which was relatively uneventful.

T.J. Watt managed to record the crucial sack he needed to equal Michael Strahan's record of 22.5 in a single season, but that occurred amongst a backdrop where six straight punts were kicked before Justin Tucker leveled the scores with a 24-yard field goal.

Then came the second half.

Ravens running back Latavius Murray decided to grab the game by the scruff of the neck and looked impossible to stop at one stage. However, the Ravens scored the game's first touchdown after Murray charged straight through the middle of the Steelers defensive line for a 46-yard run to make it 10-3.

Momentum had this time swung towards the Ravens, who sacked Roethlisberger with 4:51 remaining in the third after Boswell's 40-yard field goal reduced the deficit to just four points.

The fourth quarter was one full of tension. Not one player wanted to put a foot wrong, and with news that the Jacksonville Jaguars were beating the Indianapolis Colts, one slip could see any hopes of reaching the playoffs snatched away.

This was certainly a game where the defenses excelled, and it looked like the Ravens would be able to hold on, but in the final three minutes, the Steelers took the lead after Roethlisberger's six-yard pass connected with Chase Claypool for a TD and, more importantly, put Pittsburgh 13-10 following the extra point.

However, when a team has a kicking machine-like Tucker, the Ravens can never be counted out. Luckily Huntley managed to get his team into field goal range which allowed the 32-year-old to make a 46-yard kick and tie the scores at 13-13.

It's no surprise that despite the low scoring, both teams produced a thrilling matchup, but Roethlisberger showed what the Steelers would miss if he leaves or retires. It takes experience and calmness to thrive in the situation he faced in overtime. Some QBs would have panicked. Some wouldn't have been confident they could make those eight-season defining yards, and others would have asked the kicker to bail them out of trouble. Not Big Ben, he still showed glimpses of an illustrious 18 year playing career, and nothing will make him happier than stopping Baltimore from reaching the playoffs in his final regular-season game.

Re-live the best moments of Pittsburgh's overtime win against Baltimore below.

The Steelers are going to the playoffs!

The Steelers are going to the playoffs!

Boswell's 36 yard field goal is good to beat the Ravens 16-13 and Pittsburgh will secure a place in the playoffs as long as the game between the Las Vegas Raiders and the Los Angeles Chargers ends in a tie.

Steelers win it in OT! 🙌

facebook twitter whatsapp
The Steelers field goal unit is on the field following Harris' 15 yard run to the Baltimore 16.

Steelers make the first down and are in field goal range!

Roethlisberger has got his team in field goal range!

A 10-yard pass to McCloud has given the team a new set of downs and the chance of making a field goal.

The Steelers are between a rock and hard place on the Ravens 41.

Go for it or bring Boswell on for a 60 yard field goal.

Chris Boswell warming up on the sidelines

The Steelers offence is edging ever closer to getting into field goal range and potentially beating the Ravens in overtime.

Kicker Boswell can be seen warming up on the sideline.

Steelers offence take to the field after Ravens punt

Roethlisberger and his Steelers offence take to the field on their own 17 as they look to put this game to bed.

Next score, whether it be a TD or field, goal wins the game and potentially secures a playoff spot.

Ravens to start on their own 24

Overtime is underway in Maryland.

Duvernay receives Boswell's kick on his own 6 yard line and runs 18 yards before being stopped at the 24.

Overtime: Ravens win the toss and elect to receive

The Ravens win the toss and elect to receive.

Both teams level at 13-13, a potential place in the playoffs at stake, this is going to be one memorable finish.

Ravens forced to punt and the game goes to overtime

The Ravens couldn't bring the game to an end with a scoring play so are forced to punt.

Steelers have the ball at their own 31, Roethlisberger takes a knee and the game goes to overtime.

Meanwhile the Jaguars have beat the Colts meaning whoever wins will have a shot at reaching the playoffs.

Steelers give ball back to the Ravens with 40 seconds remaining

All hope lies on the Steelers defence after they were forced to punt the ball away.

Huntley and the Ravens offence begin thier final drive of the game on their own 18, they will be hoping to get in field goal range for Tucker.

Steelers begin final drive on their own 25

Tucker's kick clears the Steelers endzone and the offence starts on their own 25 with one timeout remaining.

We should be in for an entertaining finish here in Maryland.

.@jtuck9's field goal is good and we've got a tie game❗️

The Steelers lead the Ravens 13-10, but it's the home team who will have possesion on the Steelers 34.

Chase Claypool scores a huge touchdown for the Steelers after receiving a 6-yard pass.

Boswell's extra point is good and the Steelers now lead 13-10 with 2:54 remaining in the fourth and final quarter.

The Steelers are now in the playoffs with the Jaguars still leading the Colts in Florida.

Steelers take the lead with 2:54 to go! #HereWeGo

Roethlisberger's bullet of a 20 yard pass finds McCloud on the Ravens 19.

A huge set of downs now for the Steelers, whoever scores next will be in control of this division matchup.

Ravens forced to punt and Steelers reach the 50

The Ravens were forced to punt on their last drive.

Koch's punt found McCloud at his own 27 yard line who then made a 23 yard run before being stopped at the 50.

Ravens have the ball following a Steelers four and out

The Ravens are back in possesion of the football after forcing the Steelers to punt.

Harvin's punt from the 50 is caught by Duvernay on his own 14 who signals for a fair catch.

Steelers intercept Huntley's pass at the start of the fourth quarter

The fourth quarter starts off with a Steelers interception!

Huntley's pass is intercepted by Cameron Sutton in the endzone and the Steelers offence get to work on their own 20.

Just one quarter remains of the regular season for both teams.

Ravens RB Latavius Murray is starting to find gaps within the Steelers defence and has put his team in the driving seat.

Will the Steelers mount a comeback or will the Ravens hold on for the win?

The Ravens running game is starting to click into gear.

Murray has produced a 22 yard and 27 yard run back to back!

The Steelers need to find a way to stop him fast.