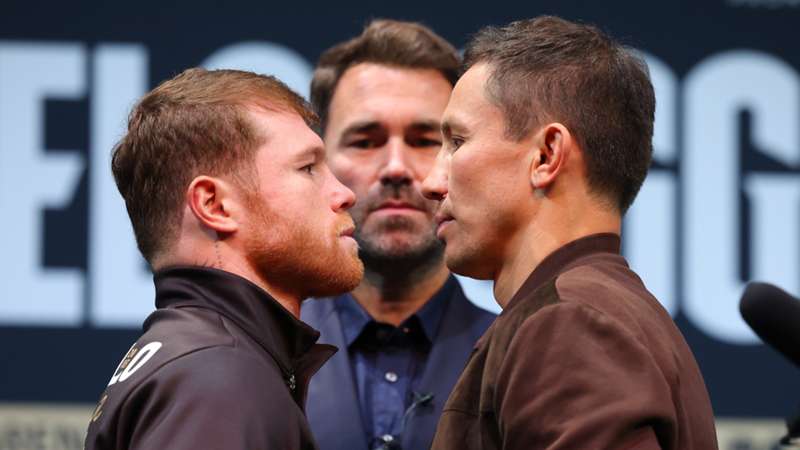 Ed Mullholland/Matchroom
Check your region for Canelo vs. GGG 3 on DAZN

Canelo Alvarez and Gennadiy Golovkin have one final staredown before fight night.

Finally, Canelo Alvarez and Gennadiy Golovkin will battle for the third time on Sept. 17 for the undisputed super middleweight championship at T-Mobile Arena in Las Vegas live on DAZN PPV in the U.S., Canada, UK, Ireland, Australia, and New Zealand as well as around the world on DAZN (except Mexico, Kazakhstan and Latin America; check your region for availability).

The buildup has been intense, with the fighters showing disdain for one another. Before they touch gloves for possibly the final time, Canelo and GGG had one last staredown on Friday at Toshiba Plaza in Las Vegas, right outside of T-Mobile Arena, where the first two fights were held and the location of Saturday's trilogy.

Each fighter had no problem making the 168-pound weight limit. Golovkin was first to the scale and came in ripped at 167.8 pounds. Alvarez was next and was a lean 167.4.

How would each conduct the final staredown? They handled it like professionals, but you could feel the tension between them. GGG kept nodding his head with a stern look on his face, while Canelo just looked every which way at Golovkin with evil intentions in his eyes.

After the weigh-in had concluded, the unified middleweight champion gave short answers until his final response, which was his most poignant one toward his bitter rival.

"I want to tell not just only my people, all boxing fans, c'mon guys, if you really a boxing fan, you know who's the real champion," Golovkin told DAZN.

Here is what happened at the Canelo vs. GGG weigh-ins.

Canelo and GGG are on point

facebook twitter whatsapp
Gennadiy Golovkin makes his way to the scale and weighs-in at a ripped 167.8 pounds. Canelo Alvarez is next and is 167.4 pounds. We have a fight for the undisputed super middleweight championship.

A heated staredown. GGG keeps nodding his head with a stern look on his face. Canelo is looking every which way at Golovkin with evil intentions in his eyes.

facebook twitter whatsapp
It's time for the co-main event fighters to come to the stage. Israel Gonzalez is first and is 114.6 pounds. Up next is the WBC super flyweight champion Jesse Rodriguez. The titleholder comes in at 114.8 pounds.

Middleweights Austin Williams and Kieron Conway make their way to the scale. Conway is first and weighs 159.2 pounds. Williams, a highly touted prospect, comes in at 160. Prime real estate for Williams as he gets a chance to make a statement on the biggest show of the year.

Will there be any physicality as we are one day away from fight night? Or do their tempers finally explode?

DAZN will have weigh-in live results, updates and highlights.