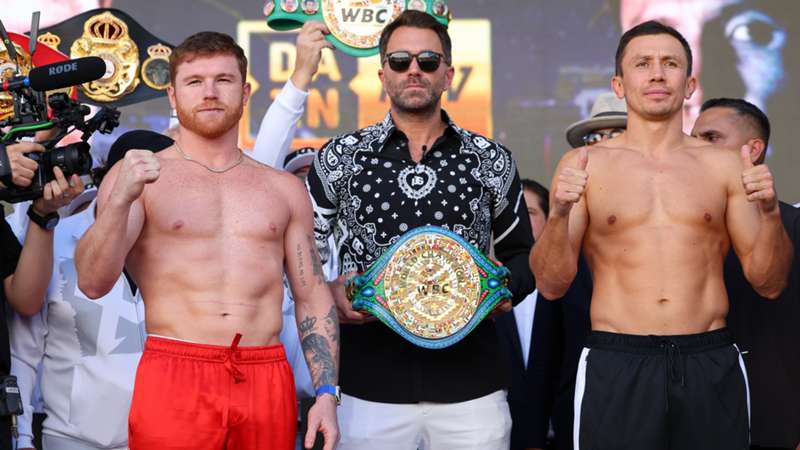 Ed Mulholland/Matchroom
Check your region for Canelo vs. GGG 3 on DAZN

All the details ahead of Saturday's undisputed super middleweight title fight.

Canelo Alvarez and Gennadiy Golovkin battle for the third time on Saturday for the undisputed super middleweight championship at T-Mobile Arena in Las Vegas live on DAZN PPV in the U.S., Canada, UK, Ireland, Australia, and New Zealand as well as around the world on DAZN (except Mexico, Kazakhstan and Latin America; check your region for availability).

Alvarez and Golovkin will return to the scene of their previous two epic battles. The first fight ​​in September 2017 ended in a split draw, with the consensus being that Golovkin had done more than enough to earn the victory. The rematch occurred one year later, ​in September 2018, with Alvarez leaving victorious via majority decision.

After stopping Caleb Plant in November to become the first-ever undisputed champion at 168 pounds, Alvarez returned to light heavyweight to attempt to become a two-time champion against WBA (super) titlist Dmitry Bivol. However, Bivol had other plans in mind, soundly winning by unanimous decision to hand Alvarez his first loss in over eight years.

Meanwhile, Golovkin fought in April, traveling to Japan, and beat Ryoto Murata by ninth-round TKO to add the WBA (super) middleweight title to his IBF belt. So now, GGG gets a chance to avenge two fights that he feels should have gone his way.

Here is everything you need to know ahead Canelo vs. GGG 3.

Canelo Alvarez weighed in at 167.4 pounds, while Gennadiy Golovkin registered 167.8 pounds on the scales.

What channel/stream is Canelo vs. GGG 3

You can watch Canelo vs. GGG 3 on DAZN PPV  in the U.S., Canada, UK, Ireland, Australia, and New Zealand. Everywhere else around the world, you can watch the fight on your  DAZN subscription (except Mexico, Kazakhstan and Latin America; check your region for availability).

Where is the Canelo vs. GGG 3 fight?

The fight takes place at T-Mobile Arena in Las Vegas, the site of the first two bouts.