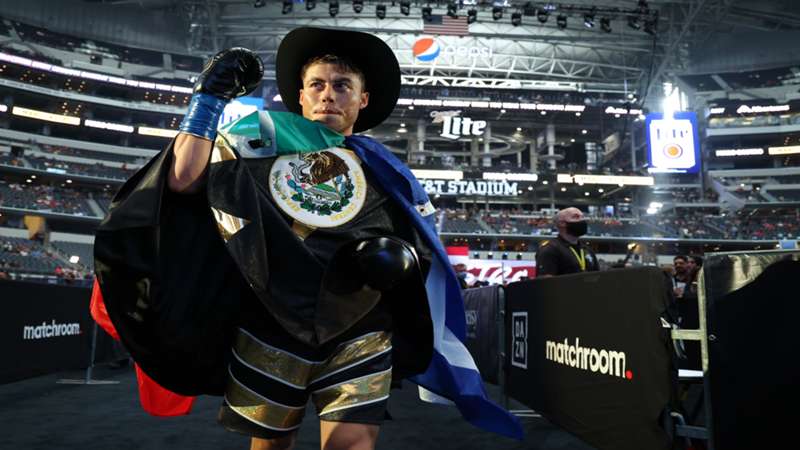 Canelo Alvarez sits on top of the boxing mountain when he meets Billy Joe Saunders on Saturday from AT&T Stadium in Arlington, Tex., in a three-belt super-middleweight title unification bout.

The undercard action to kick the night off definitely had its fair share of bright spots as well. In the featured Canelo vs. Saunders preliminary bout, decorated amateur Marc Castro ran roughshod over Irving Macias Castillo to win via TKO at the 2:04 mark of the fourth round.

Castro (3-0, 3 KOs) was too big, fast, and strong for Castillo. Castro overwhelmed Castillo in the opening minute. He found holes in Castillo’s guard and just teed off on a barrage of shots.

The onslaught continued to begin the second. Castro blasted Castillo with a flush left uppercut followed by a stinging right that stunned Castillo.

By the end of the second round, both of Castillo’s eyes were swollen, and his nose was busted up and gushing out blood.

Castro took his foot off the gas pedal in the third round but didn’t do so in the fourth round. Castro connected on a right hand to back Castillo into the ropes. Castro landed another combination, and the referee put an end to the beating.

Before Castro stepped through the ropes at the home of the Dallas Cowboys, another rising star, Keyshawn Davis, also ran his record to 3-0, beating Jose Antonio Meza by unanimous decision (60-54, 60-54, 60-54).

It was a good performance from Davis. He found his range quickly, closed the distance very well, had a crisp jab, and stung Meza on a couple of occasions to dominate Meza from start to finish to earn the lopsided decision win.

Also on the undercard, Christian Alan Gomez Duran took care of business to defeat Xavier Wilson via TKO at 2:19 of the second round.

Gomez Duran (20-2-1, 18 KOs) made it a quick night at the office. Seeing that his power was wearing Wilson down, Wilson threw a right hand which allowed Gomez Duran to counter with a lightning-quick left hook to snap Wilson's head back as it hit the canvas, and that was all she wrote.

To begin the festivities, Kelvin Davis went to 2-0, beating Jan Marsalek by unanimous decision (38-37, 38-37, 38-37). Davis had things well in control and was cruising to an easy decision win, and then Marsalek sent him to the canvas with 30 seconds remaining in the fight. Davis made it back to his feet, but Marsalek was unable to land the finishing blow.