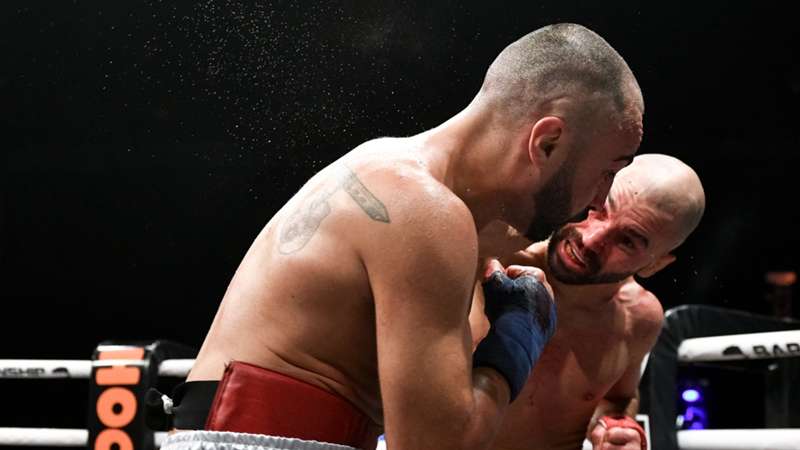 Phil Lambert
Watch Corey B on the DAZN Show

The TikTokker went at it with the former champion

Corey B explained the background of his contretemps with Paulie Malignaggi.

The pair of them were involved in a stramash, a session of rough-housing and a spat at the Atlantic City fight between Lamar Odom and Aaron Carter.

‘B’ kickstarted the aggro when he slapped powder at the back of the former champion boxer’s neck, and Malignaggi elected to charge his tormentor, before getting him in a lockdown as the pair then elected to twirl around by the boxing ring before being separated.

The edifying spectacle was a result of Malignaggi complaining over B’s decision to take up boxing and talk about the decision on the radio.

B explained to the DAZN Boxing Show how the momentous event came about.

“I started boxing because I wanted to lose weight. I was 192lbs six months ago, so I picked up boxing.

“I was a big fan of boxing my whole entire life. I was never allowed to box because I had a protective mum who didn’t want me to get hit in the face.”

He then recounted how Malignaggi took an exception to his chosen form of exercise.

“I’m an athlete, I’m just doing this for fitness,”he continued.

“And I was excited and on the radio talking about doing it. For some reason Paulie Malignaggi called up the radio station saying TikTokers and Youtubers are a problem for boxing, and I should quit while I’m ahead.

“That p—ed me off. And I know who Paulie was, alright 'Mr Left Hand'.

“He was there trash talking me, 'If I ever saw him in person I’d be afraid to man up and say anything to his face.' I’m a prankster, if you mess with me, I’m going to do something foolish.

“I hit him in the back of the neck, I was going to pour crackers on his head. I hit him with baby powder. He rushed me, I went low, picked him up, he tried to put me in a headlock and security broke it up.”

“I think Paulie wanted clout, I think that’s why he called up my morning show. He knew I was going to be there. I think he was clout-chasing. He’s been calling me out, he’s called my radio station twice so far.”