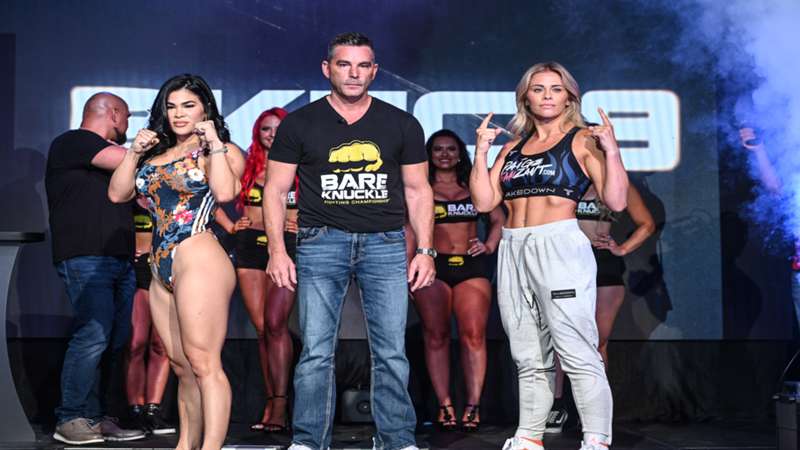 Those were the correct scorecards. VanZant had no sense of urgency in the fifth round, and it cost her. No reason for her storm out of the ring and walk away like she did. Very disrespectful.

facebook twitter whatsapp
No urgency from VanZant. She lands a one-two but doesn't follow up. Another jab from VanZant and then rushes in for a one-two. Ostovich finally connects with a right and left. Time is running down and VanZant gets Ostovich to the ropes and lands a flurry to the end the fight. Don't know why VanZant didn't come out like a ball of fire, instead of being content with the jab and feeling like she had things in control. (10-9 VanZant, 48-47 Ostovich)

facebook twitter whatsapp
A jab begins the round for VanZant, which busts up Ostovich's nose. VanZant fires off a right and then a left. She seems to have the momentum. Ostovich rebounds and rocks VanZant with a right hand. Ostovich rushes in and throws a barrage of shots but VanZant survives. VanZant needs a finish. (10-9 Ostovich, 39-37 Ostovich)

facebook twitter whatsapp
VanZant comes right back to the jab. Tired of getting jabbed to death, Ostovich blasts a right hand. They battle in the clinch and Ostovich lands a right. An uppercut by VanZant. Another counter right by Ostovich, but VanZant with a left. Ostovich is timing VanZant's jab and fires off a right followed by a left. A good close of the rounf for Ostovich. (10-9 Ostovich, 29-28 VanZant)

facebook twitter whatsapp
A stiff left jab from VanZant but Ostovich counters with a right. Two lefts by VanZant. VanZant sticking to the game plan and connects on another left jab. A right hand from Ostovich but VanZant connects with a left hook. Much better round for VanZant. (10-9 VanZant, 19-19)

facebook twitter whatsapp
Rapid fire start for both ladies. Ostovich lands a hard right hand. VanZant grabs the head and starts unloading but it is illegal. A hard left from Ostovich. A right hand by VanZant but Ostovich cames back with a left. Ostovich with another hard right to end the round. (10-9 Ostovich)

facebook twitter whatsapp
It's time for the main event of BKFC 19 as Paige VanZant (0-1) battles Rachael Ostovich in women's flyweight action. All the talking has been done. Time to knuckle up.

Adams and Terrell were in the clinch battling for position when Adams hit a short left hook to the head to send Terrell to the mat. The referee was counting to ten and Terrell shook his head no that he wouldn't continue.

Mick Terrill didn't want the smoke! Arnold Adams gets the W in this very important bout.

In the first two rounds, it was a technical battle with Adams and Terrell. They were using good footwork, popping the jab, and working in the clinch. In the second round, it looked like Terrell had sent Adams to the canvas with a right but the referee ruled it a slip.

A statement win for Adams, who now has seemed to earn a crack at heavyweight champion Joey Beltran.

Heavyweights looking to make a statement

facebook twitter whatsapp
It's time for the BKFC 19 co-main event as Mick Terrell (6-0) faces off with Arnold Adams (4-1) in heavyweight action. Terrell is a bare knuckle fighter coming over from England. Adams was the first BKFC heavyweight champion.

This is going to be fun. Don't blink as it shouldn't last long.

Hart def. Savage via knockout at 1:55 of the third round.

With time winding down in the third round, Hart had Savage against the ropes and unloaded a series of punches. Savage kept looking at the referee, wondering when the fight would be stopped. Hart kept going with lefts and rights. Finally, the referee stepped in with five seconds remaining to put an end to the beating.

This was Hart's fight from the opening bell to the stoppage. She stayed on the inside and gave Savage no room to breathe. Hart pounded the body and then would go upstairs to keep Savage guessing the entire fight.

A punishing performance from Hart. She made a definitive statement and proved the VanZant win was no fluke.

What a win for Britain Hart. She has really made a name for herself in @bareknucklefc.

Rachael Ostovich is getting ready for BKFC debut

Sterling wasted zero time. As soon her and Cobb reached the center line, Sterling bum rushed Cobb and started throwing an onslaught of punches. Normally, fighters stop and take a break. Not Sterling, as she kept going and didn't stop until the referee stepped in to wave it off. When it was stopped, Cobb's left eye was full of blood.

What a performance by Sterling. She is must-watch television and someone you need to keep your eye on.

Geane Herrera shines in second round KO of Abdiel Velasquez

Herrera def. Velasquez via knockout at 0:14 of the second round.

In the opening seconds, a counter left by Herrera sent Velasquez to the mat. Moments later, Velasquez landed a shot and a grazing right sent him down. Blood was pouring down the face of Velasquez and Herrera smelled it. Barrera threw a barrage of shots to send Velasquez down for the third time of the opening round.

Velasquez went right at Barrera and connected on a left and right. Barrera was able to gain a little space and landed a two-punch combination to send Velasquez to the canvas for the final time as the referee immediately waved it off.

facebook twitter whatsapp
When the winner had already been announced, two people came out of the crowd and tried to attack Blue Face. The music star had none of it as he punched one the men with a straight right hand. Police immediately rushed and apprehended them and had to forcibly get them out of the ring. Completely uncalled for and hopefully they are arrested.

WE GOT AN EVEN BIGGER FIGHT AFTER THE #BOXING EXHIBITION ENDS!@bluefacebleedem throwing BOMBS!

Blue Face showed some decent skills. He used his reach well. He showed a good jab, power in both hands in which he made Trujilo spun around on multiple occasions. In the third round, Blue Face earned a standing knockdown after a barrage of shots.

Would like to see Blue Face compete again as he showed some legitimate skills.

Money was the more aggressive fighter in the opening round. He landed the cleaner punches. Ireland took the final two rounds by using his superior footwork, landing the harder punches to take home the victory.

A more entertaining contest than we saw in the previous fight.