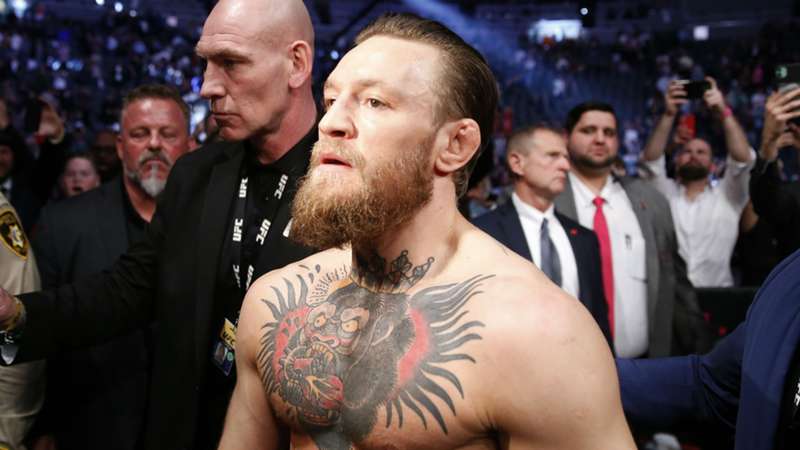 (Getty Images)
Check for Canelo vs. Bivol on DAZN in your country

"Notorious" was all ears listening to and considering challenges from Oliveira and Chandler after their UFC 274 victories.

Charles Oliveira and Michael Chandler were hyped to call Conor McGregor out following their respective victories at UFC 274 at the Footprint Center in Phoenix on Saturday night.

And "Notorious" was all ears.

McGregor took to his Twitter account after watching Chandler obliterate Tony Ferguson via a second-round knockout (front kick), which was later followed by Oliveira's first-round submission (rear-naked choke) of Justin Gaethje in the main event.

Before a victorious Oliveira left the Octagon, he made sure that he stated through an interpreter: "Hey, Conor McGregor — you coming up or you're going to run away?"

I’m not sure I wish to cut the weight. I am really enjoying being built like a refrigerator. I feel I want to fight at this size just to watch it back lol. But I’d love to fight the Brazilian, 100%! I love Brazil and I’m unbeaten against Brazil. All KO’s. I’ve some thinking to do

At the onset of the UFC 274 main event, Oliveira had to vacate the lightweight title after failing to make weight Friday. However, with the big win over Gaethje, Oliveira is now the No. 1 contender for the championship.

I’d have a nice knock off this guy, no doubt about it. A firework spectacle. I like the 170 shout also. Tipped him over. I’m definitely game to fight this guy at some stage in my career. I see it happening after tonight. Congrats on a solid win Michael and another barnstormer.

That was in reference to Chandler's fiery callout of the Irish superstar. Earlier in the night, Chandler said that if he doesn't get the winner of Oliveira-Gaethje that he'd be willing to move up to 170 pounds to make the McGregor tilt happen.

"Yeah, that's a fun one, man," White said of the prospects of pairing McGregor and Chandler together in the Octagon someday. "Who the hell wouldn't want to see that fight? But Conor is not ready yet, so Conor is hurt. When Conor is 100 percent and can actually really start training for a fight, then we talk about what's next for Conor. But listen ... who doesn't want to see Chandler vs. Conor? Raise your hand."