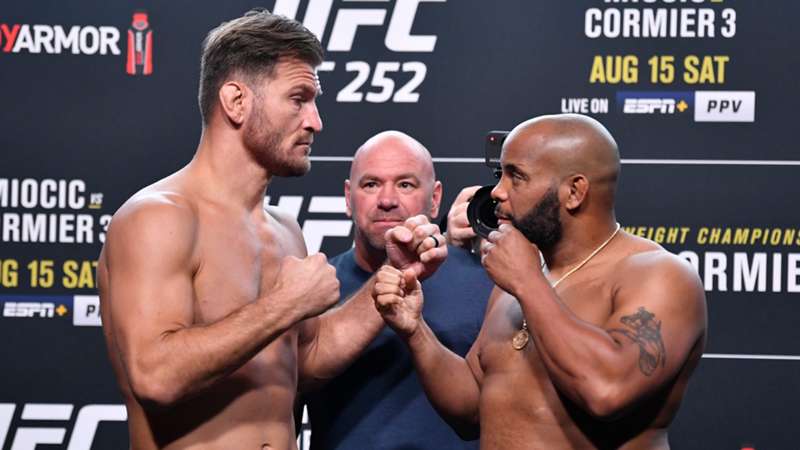 Here's a guide to everything you need to know about UFC 252: Stipe Miocic vs. Daniel Cormier 3, including fight times and how to watch.

Stipe Miocic will defend his heavyweight title against Daniel Cormier in the main event of UFC 252, live from the UFC Apex in Las Vegas on Saturday night.

The bout marks the highly anticipated trilogy fight that should not only resolve their rivalry, but also declare the greatest heavyweight in UFC history at the same time. Adding to the bout's intrigue is the fact that the 41-year-old Cormier has vowed to retire regardless of the outcome.

The rivalry started back at UFC 226 in July 2018, when Cormier shocked Miocic with a first-round KO (punches) to become the UFC's light heavyweight and heavyweight double champion. Cormier further irked Miocic that November by defending the heavyweight strap against Derrick Lewis, instead of granting him the immediate rematch.

Miocic channeled that fury to deliver a fourth-round TKO (punches) of Cormier at UFC 241 last August to reclaim the heavyweight title and thus setting up this trilogy.

Here is everything you need to know about how to watch UFC 252, including channels, pay-per-view prices and fight times.

🌍 Where are you tuning in from?

In Canada, the early prelims are on UFC Fight Pass and TSN, the prelims continue on TSN and RDS, and the pay-per-view main card is available on Bell, Rogers, Shaw, SaskTel, Videotron, Telus and Eastlink, as well as UFC PPV on UFC Fight Pass.

In Spain, the early prelims and prelims will be on UFC Fight Pass with the main card available at 4 a.m. CEST (Sunday) on DAZN, the global sports streaming service, and UFC PPV on UFC Fight Pass.

Broadcast coverage of UFC 252 will begin with the early prelims at 7 p.m. ET followed by the prelims at 8 p.m. ET. The pay-per-view event is slated to begin at 10 p.m. ET. Stipe Miocic and Daniel Cormier are expected to enter the Octagon at about 12:15 a.m. ET for their rubber match, although the exact time depends on the length of earlier bouts.

The main card of UFC 252 is available via pay-per-view in the United States on ESPN+, which requires a monthly or annual subscription. The PPV price for UFC 252 is $64.99 for current subscribers. For new subscribers, a bundle price of UFC 252 and an ESPN+ yearly subscription is $84.98.

Pricing varies globally, depending on region and platform.