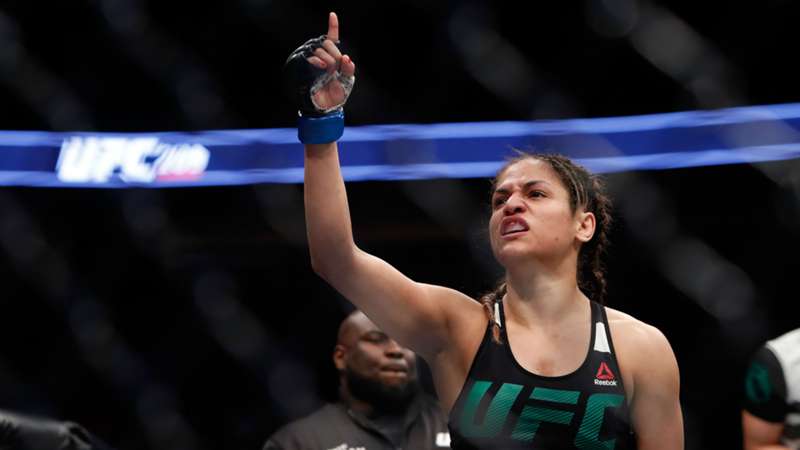 Cynthia Calvillo made her women's flyweight debut a successful one by deploying her wrestling skills and holding her own in the standup against top-ranked Jessica Eye to earn a unanimous decision victory.

The main event was the second in as many weeks where women headlined the card. Amanda Nunes defended her women's featherweight title against Felicia Spencer at UFC 250. This fight was a lot more competitive but was an impressive performance by Calvillo to earn scorecards of 49-46, 49-46 and 48-47.

Eye was hoping to earn her way back into a title opportunity against Valentina Shevchenko, but there is new blood in the division with the 32-year-old climbing up a weight class and having little trouble with Eye.

After a relatively tentative opening frame, Calvillo finally got the fight into her comfort zone by scoring a takedown in the second round. Calvillo eventually made her way to Eye's back, but the former title contender managed to defend from being submitted. The two had a close round in the third, but Calvillo again took Eye down and controlled the action for the final minute.

Knowing that the takedown was available, Calvillo brought Eye down to the canvas in the first 30 seconds of the fourth round. Eye again successfully defended against the submission and climbed back to her feet. Calvillo appeared to expend a lot of energy with the groundwork, but Eye was unable to take advantage of her opponent's growing fatigue.

Eye seemed to get the advantage in the striking department in the final round until Calvillo brought her down and ran through a string of submission attempts.

Calvillo earned the decision and will certainly crack the rankings in her new weight class with an exceptional performance.

In the co-main event, Marvin Vettori settled his bad blood feud with Karl Roberson by securing a first-round submission.

The two were supposed to meet at UFC 249 in May. However, weight-cutting complications caused Roberson to pull out of the fight the day before it was scheduled to take place. This caused a great deal of friction as Vettori engaged in a shouting match with Roberson at the host hotel.

The fight was rescheduled for the June 13 card and Vettori dominated the grudge match.

Roberson — who missed weight at Friday's weigh-in — never found his groove as Vettori picked his spots and used his wrestling to ground his hard-hitting opponent. After nearly securing a guillotine choke, Vettori got the edge in a scramble and planted Roberson on his back. The Italian used some ground and pound to find an opening and sunk in a rear-naked choke to elicit the tap out at the 4:17 mark.