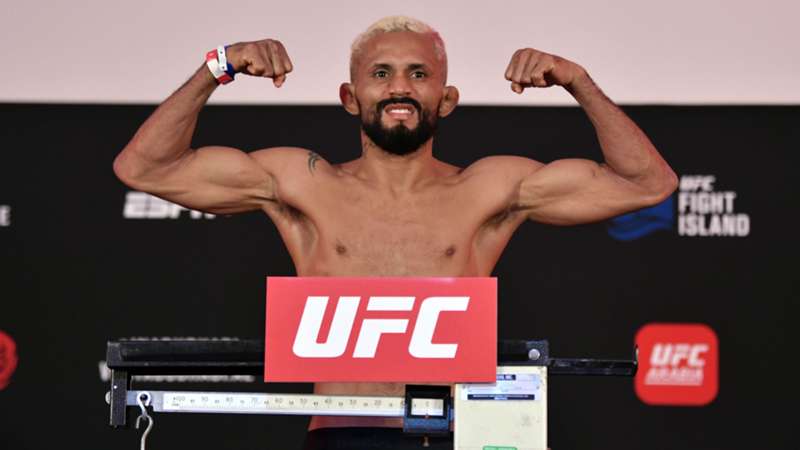 Deiveson Figueiredo put a thorough beating on Joseph Benavidez and secured the belt with a first-round submission.

Deiveson Figueiredo made good on his second opportunity to claim UFC flyweight gold, dominating Joseph Benavidez to claim the vacant title in the main event of UFC's third show on Fight Island on Saturday night.

Figueiredo had a lot to deal with heading into this bout. In February, he stopped Benavidez in the second round but couldn't claim the title because he came in overweight. The rematch was rescheduled for Fight Island, but Figueiredo tested positive for COVID-19 just seven days before the fight. Fortunately for the Brazilian, he passed a second test and subsequent additional tests and was cleared to fight.

Once in the Octagon, Figueiredo proved that the first fight was no fluke; he administered a vicious beating on a perennial title contender.

It was one-way traffic from the outset. Figueiredo dropped Benavidez in the opening seconds with a right hook and nearly ended the fight with a series of rear-naked choke attempts that were in extremely deep. A resilient Benavidez somehow managed to survive. Little did Benavidez know the worst had yet to arrive.

HOW DOES BENAVIDEZ KEEP ESCAPING!? 🤯

Benavidez tried to punch his way back into the fight but found himself put down on the canvas twice more. Figueiredo pounced on his wounded foe and throttled him with vicious ground and pound highlighted by elbow strikes. He wouldn't allow Benavidez to escape a second time and again applied a rear-naked choke.

Benavidez fought as much as he could until he lost consciousness at 4:48 of the round.

There's a new sheriff in the flyweight division, and his name is Deiveson Figueiredo.

In the co-main event, Jack Hermansson made short work of Kelvin Gastelum with a heel hook submission in under 90 seconds.

This was expected to be a highly competitive showdown between middleweights in desperate need of a win to stay afloat in a crowded division. Gastelum was just two fights removed from narrowly losing a decision to Israel Adesanya for the interim title. Hermansson was stopped by Jared Cannonier in September 2019.

But Hermansson's high-level grappling quickly neutralized Gastelum's wrestling. It came as a surprise when Hermansson initiated a takedown in the opening minute, but Gastelum reversed position and appeared to have the advantage.

That advantage was quickly neutralized as Hermansson got a hold of Gastelum's leg, locked in the heel hook and got the tapout at 1:18.