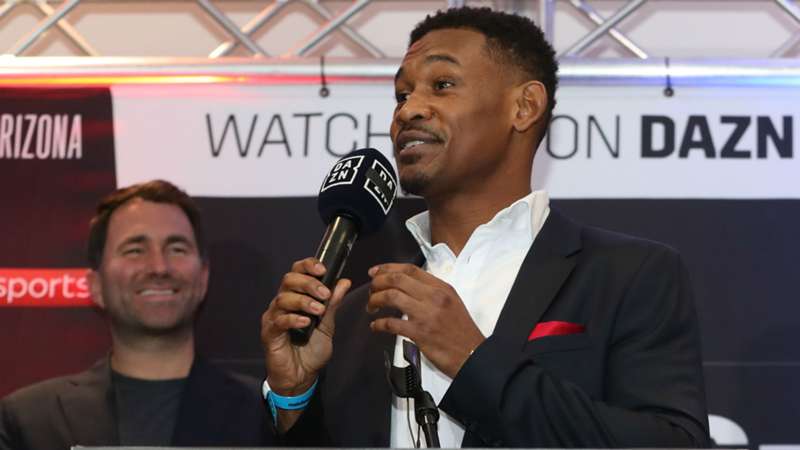 "The Miracle Man" learned plenty fighting the rivals two years apart and detailed those experiences in a conversation with Eddie Hearn.

Styles make fights, and Daniel Jacobs got to learn the fighting styles of both Gennadiy Golovkin and Saul "Canelo" Alvarez firsthand.

After suffering a controversial unanimous-decision loss to GGG in March 2017 and a unanimous-decision defeat to Canelo last May, Jacobs has had plenty of time to assess each middleweight champion's style. If Canelo is going to put his WBA (Super) middleweight championship up against Golovkin's IBF strap in a trilogy bout this year, then perhaps Jacobs' analysis of both fighters will give fight fans some details to look out for.

During a fighter Q&A with Matchroom Boxing USA president Eddie Hearn on Monday, "The Miracle Man" peered into his rearview mirror and compared his experiences fighting both.

"I found Canelo to be a little bit more slippery, trickier but less active as far as pressure and punch output," Jacobs began telling Hearn.

"But I felt GGG to be more active as far as his pressure and even though he missed a lot, I do feel like he was the tougher challenge because he imposed himself or tried to at least," he continued. "He tried to impose himself and he tried to make it a good go.

"I think Canelo was just worried about being a counterpuncher and fighting in spots. It could have been more of an entertaining fight — me and Canelo — but I just think that the GGG fight was probably the tougher (bout)."

Although each bout ended with the same result, Jacobs had two contrasting experiences, as described in his aforementioned analysis. Jacobs' loss against GGG had him trading firepower and having to deal with the Kazakh warrior's constant pressure inside cramped quarters. Although all three judges at Madison Square Garden in New York City that night gave the nod to Golovkin, some boxing pundits and fans felt like Jacobs had done enough to have his hand raised at the end of the bout.

His unanimous decision loss to Canelo was more conclusive, as Jacobs struggled to make weight and then got off to a late start once the bell rung. Plus, Canelo showed off that elusive, "slippery" defense that Jacobs just couldn't figure out.

We'll see if Jacobs' details ring true if the two rivals fight in a trilogy bout later this year.

Chris Mannix and Sergio Mora spoke about the possibility of a Canelo-GGG 3 fight on DAZN's "JABS" show earlier this month.

"I have a sneaky suspicion that this fight is going to be more competitive than people are talking about," Mannix told Mora about a possible third bout between Canelo and GGG.

"I think the third fight will end in a knockout," Mora responded. "They know each other too well."

Canelo and GGG battled to an infamous split draw in September 2017. The next September, the rivals met again, with Canelo walking down Golovkin over many sequences and using that more aggressive approach to win by a majority decision.

With GGG turning 38 in April and Canelo hitting 30 in July, a third fight later in 2020 — once the coronavirus subsides — should seemingly end the rivalry once and for all.