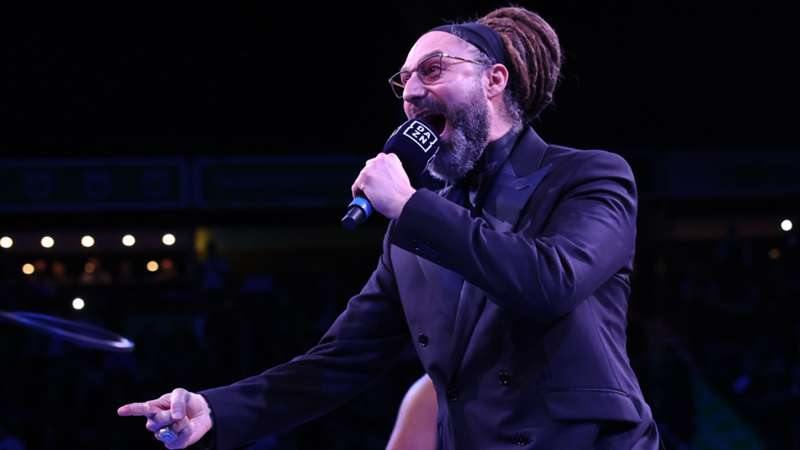 David Diamante spoke to The DAZN Boxing Show ahead of his return to announcing duties this weekend.

A cigar is lit, it seems like DAZN ring announcer David Diamante is his normal self, but that is simply not the case.

After finishing his announcing duties for 2021, Diamante returned home to New York to celebrate the holiday season, but for the 50-year-old, the various celebrations wouldn't be the priority.

While out riding his motorcycle, Diamante suffered a career-threatening injury which led to major spine surgery.

This will be Diamante's first fight night since the accident and when recalling the day for The DAZN Boxing Show, it's a miracle that he is returning the ring so soon.

"I was just coming back from the UK, it was Parker vs. Chisora 2 which was a great fight. We’d been on the road non-stop, I was so happy to get home, see my loved ones, have the holidays," Diamante began.

"I hit a really bad patch of road, it took me out. It happened in Sunset Park in Brooklyn on Third Avenue.

"If you know that stretch of road, there’s a lot of bad patches, so I hit something, went down, I slid and hit a parked van, and it just cracked me in half."

Following the operation, an intense recovery process followed and it is one which is not fully complete.

Fans will know Diamante for the energy and charisma he brings before any big fight, but this interview exposed a more vulnerable side to the ring announcer who struggled to recount his road to recovery.

"It’s really hard to talk about," he said before taking a brief pause.

"I think that’s going to be for a later date to talk about because to be really honest with you it was one of the hardest things I’ve done in my life and I don’t say that lightly, it was horrific.

"There’s a lot to it, there’s a lot of how I was first able to get to my feet and it’s a very painful story."

'The fight starts now!' is a phrase coined by Diamante and known to boxing fans across the globe and once news came out about this particular accident, they came out in full force in wishing 'The Voice of Boxing' a speedy recovery.

But while he expresses gratitude for all the messages of support, Diamante wants his return to not overshadow the fighters who put their liveliehoods on the line inside the ring.

"I just needed to take time, to do what I had to do to comeback and so many people reached out to me.

"I just want people to know I wasn’t able to respond to a lot of people, I didn’t even answer the phone a lot. I talked to a couple of people; Barak, I know I talked to you a couple of times.

"I just want to say I got everyone’s messages, saw them. It really helped me because when I was in a really dark place, it made me feel like a fighter in the ring.

"The fighter has to fight the fight, I knew I had to fight this fight myself, but to have fans on the outside cheering you, it just gave me that extra.

"I already knew I had it in me because I know who I am, but it helped and I want to say ‘thank you’ to everyone.

"Thank you so much, it means the world to me and to me that’s huge."