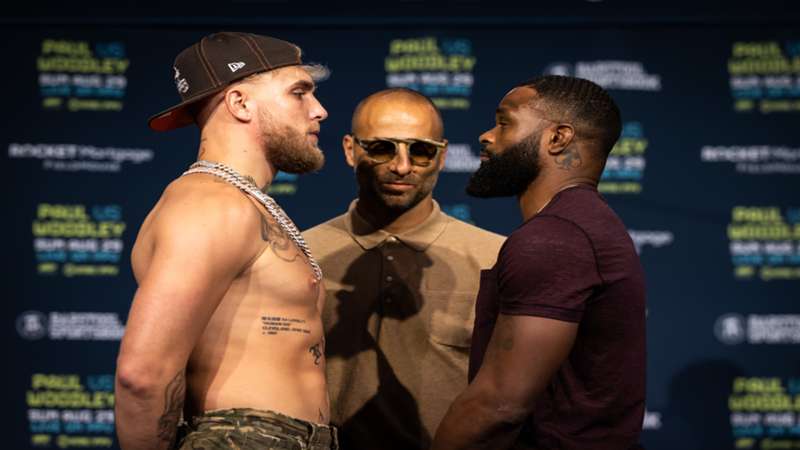 All the details to what's bound to be an explosive fight Sunday night in Cleveland.

Jake Paul and Tyron Woodley nearly getting into a scuffle during their weigh-in only turned the intensity up a notch.

And that energy is bound to explode Sunday night in Cleveland, where the YouTuber/boxer and former UFC star step into the ring to finally decide who has better hands.

Heading into the fight, Paul has vowed that he will used Woodley to prove that he's more than a YouTuber turned boxer and that he can legitimately fight.

Woodley, a former welterweight champion in the UFC, promises to bring Paul's hype train to a screeching halt.

Here are all the details to Paul vs. Woodley.

Paul weighed in at 190 pounds, while Woodley registered 189.5 pounds on the scale.

When is the Paul vs. Woodley fight? Date, start time

The Paul vs. Woodley main card will launch at 8 p.m. ET/1 a.m. BST, with the headliners expected to make their walks to the ring at approximately 11:30 p.m. ET/4:30 a.m. BST. Though that depends on the length of the earlier fights on the card.

The Paul vs. Woodley main card can be seen live on Showtime in the United States for $59.99. It can also be live streamed via Showtime's app or website. In the United Kingdom, it will be on BT Sport Box Office in the UK.

The card takes place live from the Rocket Mortgage Field House in Cleveland, Ohio. Paul is a Cleveland native.