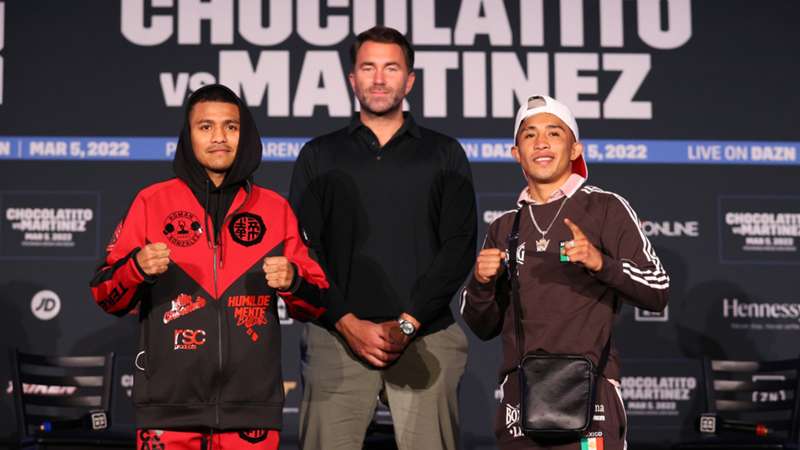 The pair will meet in a super flyweight contest on Saturday night.

A few weeks ago, this was a fight which wouldn't be on anyone's radar, but after Martinez replaced a COVID-19 stricken Juan Francisco Estrada, this fight with Gonzalez has captured the imagination of fight fans across the world.

The pair met face-to-face for the first time in front of the world's media on Thursday and while Martinez is aware of the difficulties Gonzalez may pose, he believes he has everything in his arsenal to adapt to everything that's thrown at him.

"It’s a big challenge, I’m very excited and motivated to be fighting a big legend like Roman 'Chocolatito' Gonzalez. I want to thank him for choosing us in this big fight, like I say with everything but fear, anywhere and against anyone," Martinez said.

“I want to thank the fans and people for their support. As always I want to wish that we both come out well from the fight God willing and to keep making history – this is just the start.

“As always, we’re prepared for everything, decision, for it to be a clash, a technical fight.

"We’re coming in here well trained; I want to make sure the public walks away with a good taste in their mouth.”

Gonzalez is also expecting an exciting contest and is hoping to walk away with his hand raised in San Diego.

"The pleasure is mine, when the Estrada fight fell through, but today we have a great opponent in Martinez," Gonzalez told the world's media.

"When they offered me that fight, I accepted it with pleasure, we’re in excellent in condition thank God for my training team and camp. I’m hoping to God we walk away with our hand raised in victory.

“I have an opponent that comes forward but I’m going to come forward, it’s going to be a tremendous fight and I think the fans are going to be really happy with the fight.

"I know Nicaraguan people are going to come out here and support, but the most important thing is we have God on our side. He gives me the strength and the blessing; I hope to walk away with my hand raised in victory.”