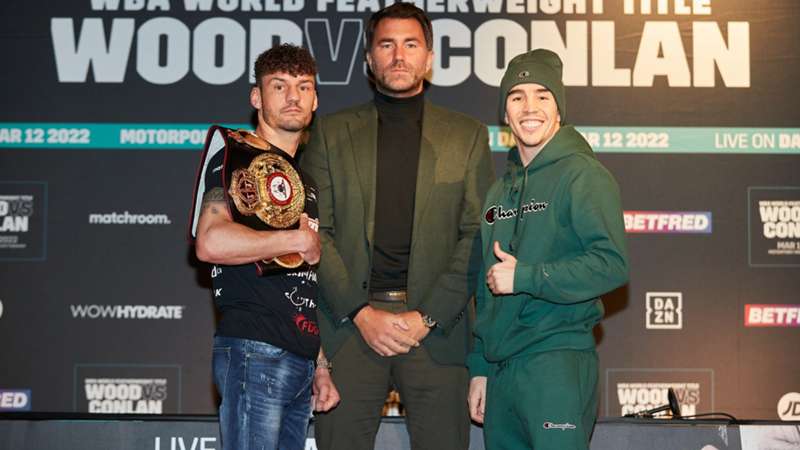 Mark Robinson
Watch Wood vs. Conlan on DAZN (except AUS and NZ)

The final touches are being made to Michael Conlan's prepations ahead of his clash with Leigh Wood on March 12th for the WBA 'regular' featherweight title.

The fight, which will be broadcast live on DAZN (except Australia and New Zealand), will see Conlan travel to Wood's home city of Nottingham in an attempt to capture a world title strap.

Speaking to The DAZN Boxing Show from his training camp, Conlan believes the best is yet to come when it comes to his ability inside the ring.

"I don’t think anybody has seen the best of me and that’s the exciting thing about it," Conlan said.

"I’ve always said, once the opponent and the level raises, that’s where I raise.

"I was s—t when I fought nationals, but when I went abroad, I was world champion, I was beating everybody, nobody could beat me.

Conlan has been installed as the favourite, but the former Olympian sees himself as the underdog and claims Wood could underestimate his punch power when the pair go head-to-head next week.

"Betting favourite now means nothing, I believe I am the underdog in this fight.

"People underestimate my own punch power, they think maybe because I don’t have loads of knockouts and I’m not flattening guys that I don’t punch hard.

"If I couldn’t punch hard people would walk right through me and I think if you speak to any of my past opponents they’d say the same."

The Northern Irishman also gave some praise to the WBA title holder, but while Wood will pose a tough test, Conlan believes it's his destiny to win a world title.

"Once you become world champion, your level raises, I understand it, I understand I’ll be facing the best Leigh Wood there’s ever been.

"But he’s going to be facing the best Michael Conlan there’s ever been because I am very hungry for this.

"This is my destiny standing in front of me.

"I’ve always said, once my opportunity comes, I will jump with both hands and I’ll grab it. There is no floor underneath, I will jump and hold onto that.

"I think I’ll make a statement in this fight. I think people will start to talk a lot more respectfully, a lot more positive about me."

If Conlan is to suceed in his date with destiny, sacrifices have to be made, but while some of these sacrifices may be tough to take, cementing his legacy and setting up his family are the only motivation Conlan needs.

"I’ve been away from my family for eight weeks now, eight weeks straight," Conlan told The DAZN Boxing Show.

"It’s hard, I’ve got two young kids, but at the same time, this has not been hard at all because I know what I’m doing it for.

"I’m doing it for my family, for me, and to give them a better life. F— everything else, f— the belts, it’s about making that life after for my family and creating legacy."