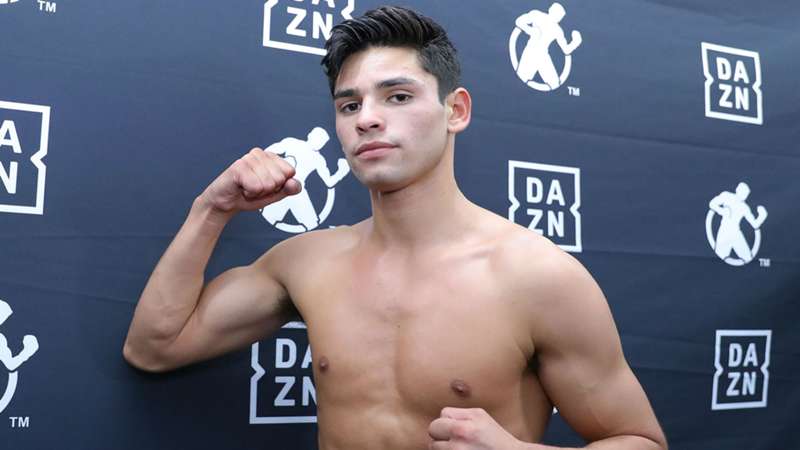 Garcia claims, "I will f— up Amir Khan!"

Ryan Garcia heard a recent Amir Khan interview, in which the British boxer said that the 21-year-old is "trying hard to be something he’s not" in the mold of an "Oscar De La Hoya-type good guy." Khan also charged that Garcia is a bit of a "robotic" fighter.

Needless to say, Garcia didn't appreciate Khan's words and let the world know by taking to his Twitter account Monday.

Look i think Amir Khan was a good fighter but i heard an interview with him about me, and i have to say i disagree with you... you may have sparred some of my rivals but you never sparred me I’d hurt you Amir right now. I’m sorry to say but It’s the truth

Garcia also spoke with FightHype.com, calling Khan "delusional as f—" and someone who "doesn't know s—."

"First of all, you don't know who I am," Garcia shot back at Khan. "I might be a pretty boy and what not, but if people get disrespectful, I'm going to get disrespectful. That's the difference between me and everybody else. I don't have to act like Oscar De La Hoya.

"They're comparing me (to De La Hoya)," he added. "I'm not comparing myself."

As far as Khan labeling Garcia as a "robotic fighter," "KingRy" invited Khan to spar with him to change that opinion by force.

"Come spar me — we could do it low key — but when you get back on the interview, you better tell them what it is because I will f— up Amir Khan," Garcia said without hesitation. "He could come in at 160 (pounds) ... he cannot f— with me at all. I will f—ing hurt Amir Khan."

"Amir Khan was a p— when he fought Crawford," Garcia said, "straight up."

That bout had Crawford dominating every round, when an accidental low blow to Khan ended the fight in a sixth-round TKO for Crawford. After the fight, Crawford said Khan used the low blow as a way to get out of the beating he was suffering.