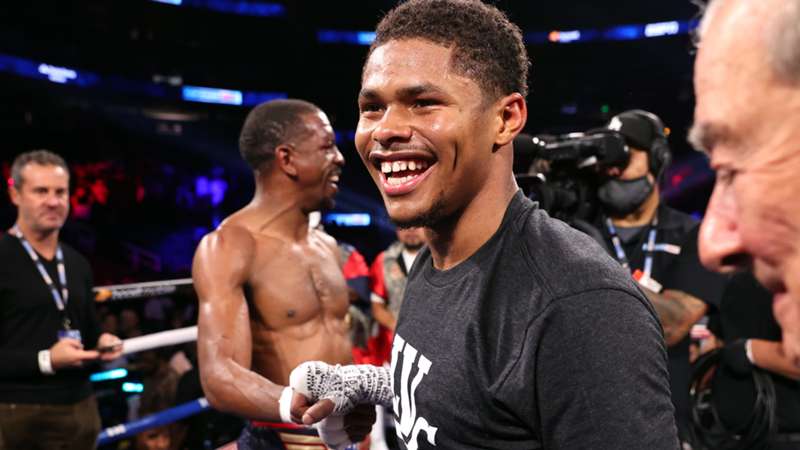 Shakur Stevenson spoke about his plans at lightweight on The DAZN Boxing Show.

Former unified super featherweight champion Shakur Stevenson has revealed who he wants to face in his first fight at lightweight.

Stevenson ended his time at 130lbs with a unaminous decision win over Robson Conceicao, but lost his WBC and WBO super featherweight titles before the fight after failing to make weight.

Now a move up to lightweight is all but confirmed, Stevenson has his sights set on one of the biggest names in not just the lightweight division, but in the sport of boxing.

"Lomachenko, I think me and Loma could be a big fight," Stevenson responded when asked by The DAZN Boxing Show about who he would want to face next.

"Make it happen in the next one or two fights, I’m ready."

Vasiliy Lomachenko ends a 10-month absence from the ring next month when he faces Jamaine Ortiz, and despite Lomachenko being considered one of the world's best pound-for-pound fighters, Stevenson believes his management team would not stand in the way of this fight being made.

"It’s clear as day, their mind is already made up on that," Stevenson said.

In a recent column for DAZN, Akin 'Ak' Reyes made a case for Isaac Cruz to be the opponent for Stevenson's first fight at 135lbs, but the 25-year-old is convinced that it would be an easy night if the two were to meet inside the ring.

"I would [take the fight against Isaac Cruz], but it’s just going to let the fans know what they already know," Stevenson claimed.

"I’m just going to box his head off, he ain’t going to be able to do anything with me."

However, while Stevenson is keen to face Lomachenko next, he is aware that the Ukrainian has his sights set on the winner of the undisputed lightweight champion rematch between Devin Haney and George Kambosos Jr. on October 15.

"At the end of the day Lomachenko wants those belts, his mind ain’t really focused on me," Stevenson concluded.

The DBS interview with Stevenson can be watched in full by DAZN subscribers when it arrives on the app later on Thursday.

Shakur also joined The DAZN Boxing Show Podcast recently, and you can listen to that episode and every episode published so far here.