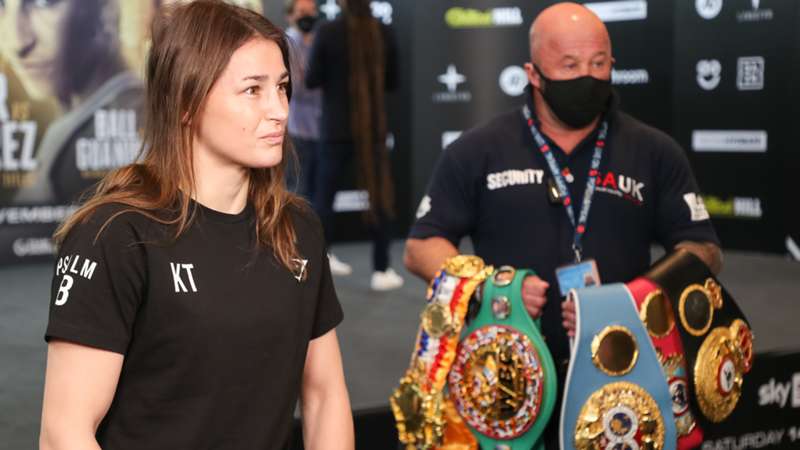 Everything you need to know about Taylor's next defence of her undisputed lightweight crown.

Katie Taylor has conquered every opponent who Eddie Hearn has placed in front of her.

The undisputed lightweight queen will look to make her latest proving point Sept. 4, when she puts her crown on the line against Jennifer Han. The championship fight will serve as the co-feature to the Josh Warrington vs. Mauricio Lara rematch main event in Leeds, England, live and worldwide on DAZN.

Since stepping outside the division with a victory over Christina Linardatou to win the WBO junior welterweight title, Taylor went back to defending her undisputed lightweight titles with a win over Delfine Persoon in a hard-fought rematch followed by two more unanimous decisions against Miriam Gutiérrez and most recently Natasha Jonas in May.

The celebrated 35-year-old will be clashing with Han, 38, who has tallied eight straight wins including a unanimous decision over Jeri Sitzes in February 2020 to make it to the biggest fight of her career.

Will Taylor continue her brilliant boxing and undefeated dominance or will Han score what would be a monumental upset?

Here's everything you need to know about Taylor vs. Han.

When is Taylor vs. Han? Date, start time

The main card is expected to launch at 2 p.m. ET/7 p.m. BST with Taylor and Han expected to make their ring walks at approximately 4 p.m. ET/9 p.m. BST, although that depends on the length of the earlier fights.

​What channel/stream is Taylor vs. Han?

The Taylor vs. Han co-main event, which will be headlined by the Warrington vs. Lara rematch, can be seen live and worldwide on DAZN.

Where is the Taylor vs. Han fight?

The Taylor vs. Han undisputed championship fight will be held at the Emerald Headingley Stadium in Leeds, England. Although Taylor will be making her debut at the venue, this will mark her fifth straight fight in the United Kingdom. Meanwhile, Han will be fighting in England for the first time in her career.