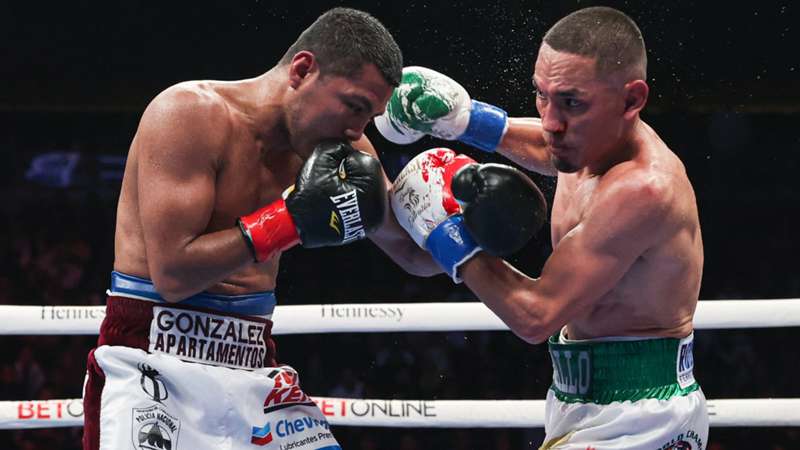 Melina Pizano/Matchroom
Watch the Estrada vs. Chocolatito 3 replay on DAZN

Chris Mannix and Sergio Mora debated whether there should be a fourth fight between the pound-for-pound legends on JABS.

This past Saturday saw Juan Francisco Estrada go 2-1 up in his rivalry with Roman 'Chocolatito' Gonzalez after beating the Nicaraguan via a majority decision in their trilogy fight at the Desert Diamond Arena in Glendale, Arizona.

The fight was a classic tale of two halves. Estrada dominated the first six rounds with Gonzalez looking old and out of his depth, but then the 35-year-old rallied and showcased why he can still mix with some of the biggest names at flyweight and super lightweight.

After what was another close contest between the two, there are already calls for a fourth fight which would be welcomed by fans and it was a topic of discussion on the latest instalment of JABS.

"I think Chocolatito answered that question, normally he is usually very humble and spiritual post-fight, but he basically said, ‘Hey show me the money’," Sergio Mora responded when asked by Chris Mannix about whether there should be a fourth Estrada vs. 'Chocolatito' fight.

"Show that man the money, he will do it a fourth time because he got to the point where he deserves a seven figure pay day, I’d love to see a fourth fight, but pay him the money."

Mannix also gave his support for a fourth fight, but would like to see both men go down different routes before going head-to-head once more in 2023.

"I would love to see a fourth fight as well, but I would want to see both these guys fight somebody else next," Mannix said.

"Let’s see Chocolatito fight for another at 115lbs and then let’s see them reconvene next year."

But in Mora's opinion, Mannix's idea is the wrong one due to the age of Gonzalez.