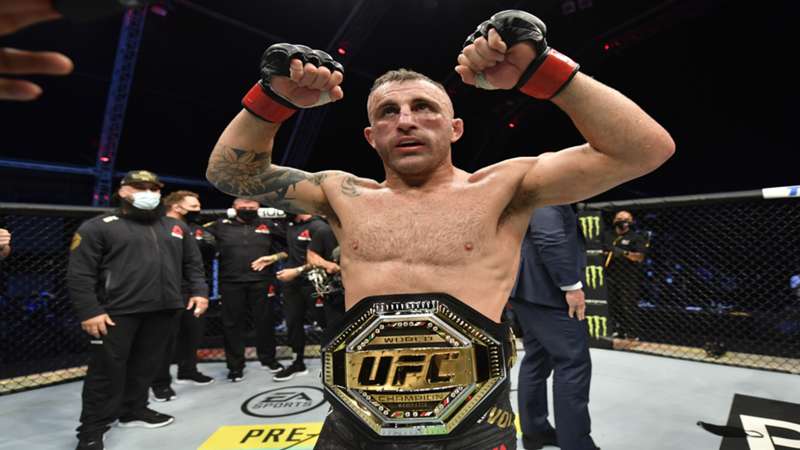 What the defending titleholder and former champ must do to be successful in their third fight.

All rivalries should have an end game. Alexander Volkanvoski and Max Holloway will do their best to punctuate their feud with an exclamation point on Saturday night.

That's when Volkanovski will defend his featherweight world championship against Holloway in their highly-anticipated trilogy fight at UFC 276 at the T-Mobile Arena in Las Vegas, and live on pay-per-view. This comes after Volkanovski snatched the title from Holloway back in December 2019 via unanimous decision, before winning their rematch by split-decision in July 2020. Despite that latter victory, many critics and fans alike felt like Holloway did enough to have his hand raised in that fight.

Now, not only will this trilogy clash once again decide featherweight supremacy, but it will allow one man to leave indelible marks on his fighting legacy with a win.

With the stakes reaching a fever pitch, DAZN listed the keys to victory for each fighter in this huge co-main event.

It’s no secret that Max Holloway believes that he’s the best boxer in the UFC. In fact, he literally declared himself just that while beating the brakes off Calvin Kattar back in January 2021. To defeat Volkanovski definitively, Holloway might have to live up to his words and be the best boxer, really letting his hands go. Reaching that high punch volume and dictating the pace could be the key to defeating Volkanovski, whether by stoppage or across the board via judges’ scorecards. While he might lack the power that Volkanovski has, Holloway more than makes up for it with his stinging, slicing combinations. Therefore, it would behoove him greatly to piece those together in this trilogy and keep them coming throughout the bout.

Volkanovski went 3-for-9 in takedowns during their rematch. Each time “The Great” attempts one in this third fight, Holloway has to make him pay. Anticipating and stuffing a takedown attempt isn’t enough. Holloway has got to punish Volk for even thinking he could take him down. Also, thwarting the takedown threat will allow Holloway to keep it a standup game and use his hands to a possible victory.

Pounce on Volkanovski, don’t let up following a knockdown

Volkanovski-Holloway II had “Blessed” scoring a knockdown late in rounds one and two. The knockdown during the waning seconds of the opening frame came via a scintillating head kick. Holloway made Volkanovski taste the canvas with an uppercut with a few ticks left in the second round as well. Each time, though, Volkanovski popped back up on his feet before the lanky Holloway could pounce on him.

After sharing 10 rounds in the Octagon together, Holloway has expressed his desire to end the trilogy early. Well, to have any chance to accomplish that, the former titleholder must pounce on the champion without mercy following a knockdown. Simply said: Holloway must smother Volkanovski on the ground before the champ can spring back up on his feet. Doing that could give Holloway his best chance to finish Volkanovski in this pivotal bout.

Alexander Volkanovski landed 75 significant leg kicks en route to grabbing the featherweight world title from Holloway in their initial clash. Within that display, the low calf kick was particularly effective for “The Great.” Volkanovski would benefit a great deal from asserting the same strike as his major weapon of choice in this trilogy. Like they did in their first meeting, Volkanovski’s leg strikes could stifle Holloway’s offense and even throw his gameplan awry if the Australian is persistent with them.

Get inside and counter

Across several sequences through their 10 rounds fought so far, Holloway has shown the ability of using his five-inch height advantage to stay on the outside and pepper Volkanovski with sharp strikes. However, through both fights, Volkanovski has shown the resiliency to get inside and strike back with shrewd counterpunching. That adjustment of working his way inside and countering precisely, and with power, aided him in having his hand raised twice in this rivalry. He does the same in this trilogy and we could very well see a clean sweep for “The Great.”

Volkanovski went for nine takedowns against Holloway in their second tilt and was successful with three of them. If Volkanovski could attempt and land these takedowns at more opportune moments, following them up with ample control time, it will not only blast Holloway’s rhythm, but it will also give judges a battery in their back to signal the Australian as the superior fighter and still featherweight champion of the world.

DAZN News will be live-blogging the UFC 276 pay-per-view main card Saturday night, beginning at 10 p.m. ET, bringing you all the live updates, results and highlights. Featherweight champion Alexander Volkanovski vs. Max Holloway 3 will serve as the co-feature to middleweight champion Israel Adesanya putting his title on the line against Jared Cannonier in the main event.