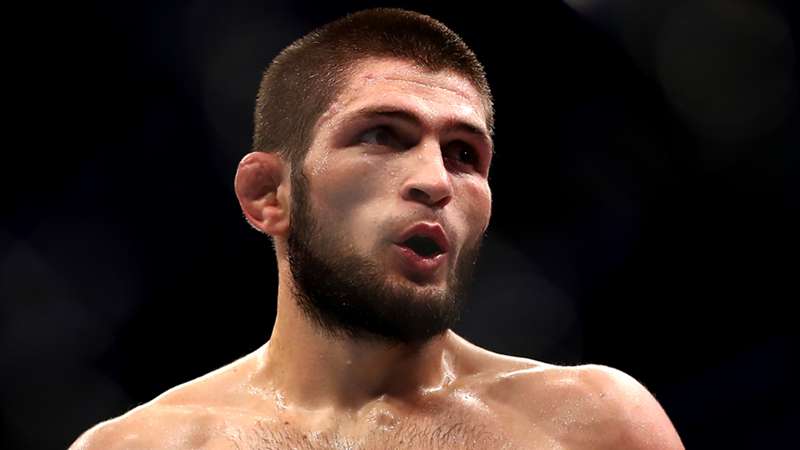 A COVID-19 travel ban has Khabib frozen in Dagestan, seriously jeopardizing his chances of defending the lightweight title against Tony Ferguson on April 18.

Dana White's hell-bent plan of making UFC 249 happen as scheduled on April 18 — despite the coronavirus outbreak — just got hit with another obstacle.

During an Instagram live chat Monday, Khabib Nurmagomedov confirmed that he's in Russia and unable to leave the country due to COVID-19 travel bans. That puts his UFC 249 fight against Tony Ferguson in serious jeopardy.

"We were training at (American Kickboxing Academy in San Jose, Calif.) without any information regarding the fight — where and how is it going to happen," Nurmagomedov said, as translated by RT Sport. "Then, the UFC told us that the fight 100 percent isn't happening in the States. And they said that 99 percent that it will happen in (the United Arab) Emirates — Abu Dhabi.

"After talking to the UFC, we decided to fly over to the Emirates a month before the fight," the UFC lightweight champion continued. "I don't remember the exact date — it was (March) 19 or 20, I'll have to check. But when we landed in Emirates, we learned that they are going to close borders and no one will be able to leave or fly in with (the) exception of residents.

"So, we had to fly back to Russia," he added. "Currently, I am in Dagestan and I am training and preparing every day, although I don't know what am I preparing for, because after we came to Russia we also learned that the borders are going to be locked. Same like in the States, same like in Europe, Emirates — everywhere. The whole world is in quarantine right now."

Ferguson says he doesn't want to hear any "excuse."

April 18 Is Getting Close @TeamKhabib & You’re Hiding In Russia. Travel Bans Will Not Prevent Me From Whoopin’ That Ass. Don’t Use It As An Excuse To Back Out. You Have Been Sent Many Locations, Send Us 1. Still My Bitch #DefendorVacate MF ⚾️ -CSO- 🇺🇸🏆🇲🇽 #ufc249 @ufc @danawhite pic.twitter.com/TVQH4mnG2e

According to ESPN's Ariel Helwani, sources with knowledge of the situation have already begun looking into alternate plans for UFC 249 due to Nurmagomedov's current state and have already offered Justin Gaethje the opportunity to fight Ferguson, instead. ESPN additionally reported that the possible Ferguson vs. Gaethje fight hasn't been agreed upon nor finalized as of yet.

Despite the global spread of the coronavirus, White has maintained that UFC 249 will happen, while refusing to reveal the location he has in mind. The possibility of Nurmagomedov being replaced by another opponent doesn't sit well with the champ, although he seemingly understands the decision if that were to indeed turn out to be the case.

"So, now I am hearing that they are looking to organize it with or without me. OK, go ahead," Nurmagomedov said later in his IG video. "Everyone should follow the laws. I am not against it. I know that fighters need to feed their families and pay their bills. I know how hard it is for the fighter. Unless they fight, they aren't getting any money.

"I am even hearing that they are looking for an opponent for Tony, because he is in the States and I am here in Russia. But I am here not on my own will. The UFC told me that this fight 100 percent isn't happening in the USA, and even if it's not happening in the Emirates, it will happen on this side of (the) Atlantic. We discussed everything with the UFC. By that time, I already spent five weeks of hard training at AKA."

While White and the UFC bullishly plow ahead planning for UFC 249, esteemed mixed martial arts coach John Kavanagh took to his Twitter account Monday and questioned why his two fighters for the company's canceled UFC London card haven't been paid or contacted.

have you heard anything from the ill fated #ufclondon card? my 2 haven't been paid or contacted. there's talk of future fights but unlike this #bellatorlondon card the majority of their training camp expenses had already gone out.

UFC London, which was supposed to be headlined by Tyron Woodley vs. Leon Edwards on March 21, was one of three UFC events canceled earlier this month due to the spread of COVID-19, although White has insisted that UFC 249 will still take place April 18.

If the Khabib vs. Ferguson fight doesn't happen, it will mark the fifth time that the bout gets called off.

There, he spoke about the obstacles of pulling UFC 249 off.

"Every day that I work on this thing, I get another curve ball thrown at me when I wake up," White told Tyson. "Every time we plan something, it falls apart. Gotta redo it, redo it. I have four or five locations right now. We're getting this deal done. Then we're gonna figure out who we can get in, who we can't, and build a card around it."

White also said: "I'm gonna try to pull off Tony vs. Khabib on April 18 and try to get some normalcy back into this country."