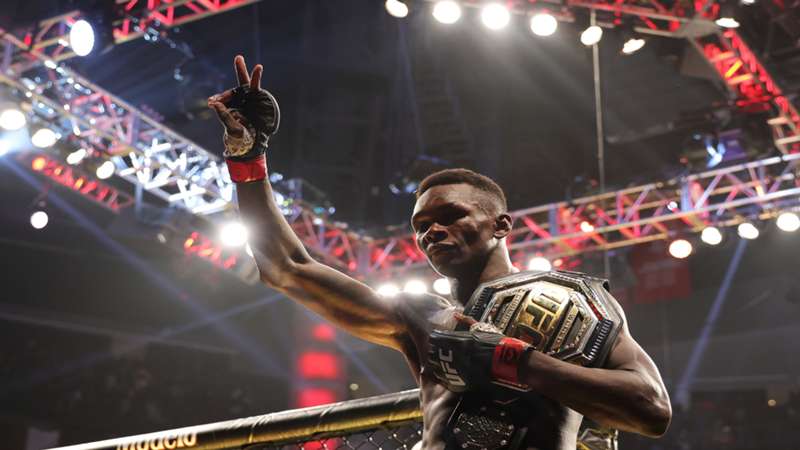 "The Last Stylebender" continues his dominance at middleweight.

Israel Adesanya got a game challenge from Jared Cannonier at UFC 276 but once again demonstrated that there are levels to MMA.

And when it comes to the middleweight division, Adesanya remains above and beyond the best.

Adesanya produced a tactical fight en route to a unanimous decision victory over Cannonier at T-Mobile Arena in Las Vegas on Saturday night to retain his middleweight world championship. Judges scored it 49-46, 49-46, and 50-45 in favor of Adesanya, who recorded his fifth title defense.

Having ran through many quality names in the division by now, Adesanya didn't waste time shifting his focus to Alex Pereira, who delivered a scintillating knockout of Sean Strickland earlier in the pay-per-view main card.

Pereira sports two victories over Adesanya during their kickboxing days, but "The Last Stylebender" warned that a UFC fight will go very differently.

There's only one man @Stylebender wants next - and that's Alex Pereira 😤 #UFC276 pic.twitter.com/iFNbXt7hdE

Although Adesanya felt Cannonier's power at times, he kept the challenger on the receiving end of a crisp, precise jab over large stretches of the fight. Those jabs would turn into piercing combinations at the times as Adesanya controlled the real estate in the Octagon with superiority. Cannonier managed to press Adesanya up against the cage several times but failed to inflict any damage due to the champion's savvy defense.

Adesanya wasn't the only champion successful at UFC 276, as teammate Alexander Volkanovski produced a masterclass domination of Max Holloway to retain his featherweight title in their trilogy fight, which served as the co-feature of the card.

Barberena was getting beat, but he more than made amends. Barberena caught Lawler with a big right hook, stepped in between his stance with a nasty elbow, and connected on a few more elbows. Lawler did his best to shake off the blows, but Barberena poured it on with another big right hook to the temple, followed by a series of unanswered rights and lefts until the ref stopped it with 13 seconds left in the second round.

He ate a lot of damage, but there's no doubt this is a massive win for Barberena.

An as advertised first round

facebook twitter whatsapp
It took about a minute for Lawler and Barberena to really start engaging. Although Barberena was more active with his punch volume, a blistering uppercut from Lawler was the highlight of the first round. And it definitely hurt Barberena.

facebook twitter whatsapp
In his first fight since knocking out Nick Diaz in September, Robbie Lawler returns to action taking on Bryan Barberena in a welterweight tilt next.

Munhoz-O'Malley ruled a No Contest

facebook twitter whatsapp
A disappointing conclusion to this pay-per-view main card opener as O'Malley inadvertently poked Munhoz's right eye. Referee Jason Herzog called a timeout, allowing Munhoz to recover. He then extended that timeout, calling in a doctor to take a closer look. Munhoz complained that his vision in the eye was impaired, and the doctor advised Herzog to end the bout. It was called at 3:09 of the second round.

A feeling-out first round

facebook twitter whatsapp
Will "The Sugar Show" continue to roll? Or will the veteran Munhoz stop him cold in his tracks? We're about to find out.

All systems go for the main card

Electric end to the prelims after Donald Cerrone's retirement

Jalin Turner just punctuated the prelims with an exclamation point by stopping Brad Riddell in 45 seconds! Turner blasted Riddell with an overhand right to the temple before just missing with a head kick. He then got his hands on Riddell and trapped him in a guillotine choke, turning up the torque and lifting his opponent's knee until he tapped out. Make it five straight wins for Turner.

We're less than 15 minutes away from the launch of the main card pay-per-view.

facebook twitter whatsapp
We'll be bringing you all the live updates, results and highlights from the main card beginning at 10 p.m. ET. So, keep it parked here all night.