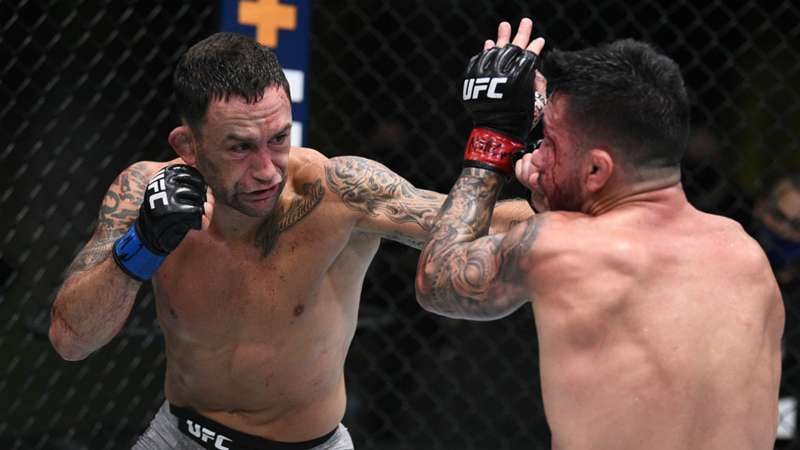 The former lightweight champion makes a successful debut in his third weight class.

Many fans were wondering if Frankie Edgar had anything left heading into his main event tilt against Pedro Munoz at the UFC Apex in Las Vegas.

"It's good to be on the winning side," Edgar told Jon Anik in his post-fight interview. "I heard a lot of MFers barking that I'm old, that I'm slow. It's nice to prove them wrong. I showed I can compete with the best at 38 years old."

"I heard a lot of MFers barking that I'm old, I'm slow... I don't want to hear nothing from anybody."@FrankieEdgar had an answer for the doubters 🤫 #UFCVegas7 pic.twitter.com/AquuA6NIAG

Munhoz started finding a home with the straight right hand from the outset of the opening round. Whenever Edgar got within range, Munhoz popped the shot off. A Munhoz stiff left jab busted open Edgar’s nose. But that didn't deter the former lightweight champion. With seconds remaining in the round, he connected on a combination to give him a bit of confidence.

At the beginning of the second, Edgar continued his momentum from the end of the first and landed a punch that caused a severe cut over Munhoz’s left eye. Blood from the cut streamed down Munhoz's face and kept forcing him to wipe his eye. Edgar took advantage of Munhoz's vision being compromised by continuously throwing punches in bunches, mixing up his hooks and short uppercuts. Munhoz began chasing after Edgar, but the former lightweight champion tossed Munhoz down to the canvas.

It was a pretty even third round until the 38-year-old Edgar started to slow. Munhoz sensed it and started to regain control by making it a focal point of throwing leg kicks and landing his straight right hand. Edgar stayed with his gameplan by circling the cage, connecting on several shots and then exiting the area so he didn't eat Munhoz's powerful punches.

Both guys came out guns blazing in the fourth as the combinations were flying in the opening minute with Munhoz getting the better of the exchanges when he clipped Edgar with a sharp right hand to the jaw. The movement of Edgar continued to give Munhoz fits as the New Jersey native was getting in and out with combinations and circling back to the middle of the Octagon.

Munhoz and Edgar continued to sling the leather in the fifth round. Even though the amount of strikes were just about the same, Edgar (24-8-1) landed the more significant blows of the final stanza when he snapped Munhoz's head back with a hard right hand to seal the victory and obtain his first win at 135 pounds.

In the co-main event, Mike Rodriguez defeated Marcin Prachnio by knockout at 2:17 of the first round in light heavyweight action.

Rodriguez (11-4, one no-contest) earned his first win since a second-round TKO of Adam Milstead in December 2018. The victory was Rodriguez's ninth win by knockout.