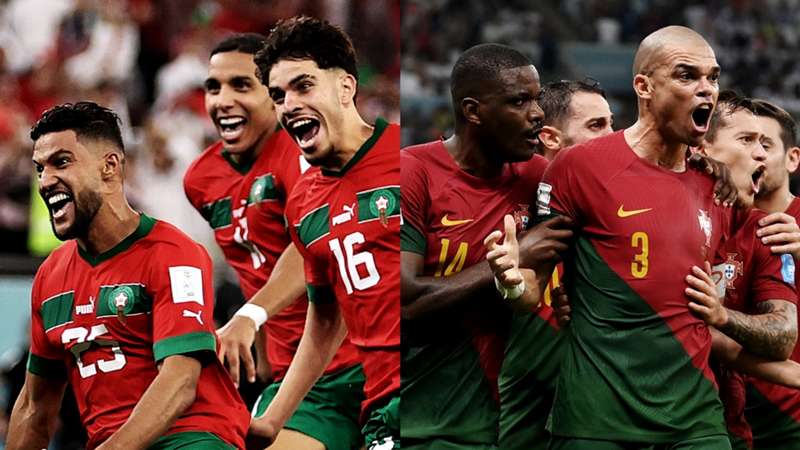 The teams meet on Saturday.

Morocco continue to defy the odds at the World Cup, and on Saturday they look to do so once again.

Facing Portugal in the quarterfinals of Qatar 2022, the Africans are arguably the story of the tournament so far. Playing a high-octane style of football, Morocco are entertaining and easy to get behind, but they'll meet a stern challenge in their European opposition as Portugal have appeared formidable at times in the competition.

The full might of the Portuguese was on display in the round of 16, where they demolished Switzlerand by a 6-1 score line. Cristiano Ronaldo notably started on the bench for that match, with his replacement, 21-year-old Gonçalo Ramos of Benfica, notching a hat-trick in the rout.

That Ramos was able to seamlessly fill the shoes of one of the greatest players to ever live speaks to Portugal's considerable squad depth, but Morocco will present a different kind of test than the Swiss.

The Moroccans have stood toe-to-toe with European powers Croatia, Belgium and Spain and have come through unscathed, with their team speed a weapon that has been utilized to full effect thus far.

Will Morocco take down another prominent European side or will Portugal's torrid form continue into the semifinals? Here's everything you need to know about Saturday's match.

Morocco vs. Portugal: What time is kickoff at Qatar 2022?

Morocco vs. Portugal: How to watch on TV or streaming

Viewers in the United States can watch the match on FOX (English) or Telemundo (Spanish). FOX can be streamed live on fuboTV (start your free trial today).

In Portugal, the match is available on Sport TV or RTP.

Morocco vs. Portugal: What stadium is hosting the match?

Along with two other venues, the Al Thumama Stadium is the smallest at Qatar 2022 but is visually unique from its counterparts.