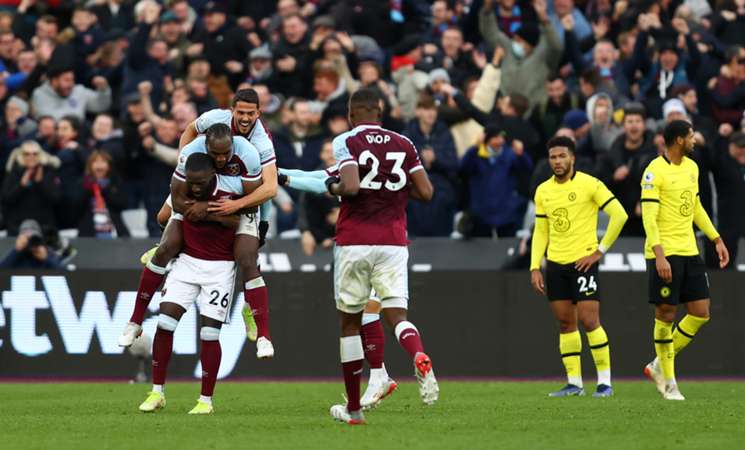 West Ham United proved that their presence in the Premier League title race is no fluke with a 3-2 win over visiting Chelsea at London Stadium on Saturday.

It was the first time the league-leading Blues have given up multiple goals in a single game, and the Hammers had to overcome two Chelsea leads to secure the victory.

Thiago Silva put the visitors on the board in the 28th minute, nodding a Mason Mount corner kick off the ground and just beyond the reach of West Ham goalkeeper Łukasz Fabiański. Chelsea would only lead for 12 minutes though, as the Hammers levelled oin a 40th minute penalty kick by Manuel Lanzini.

It looked as though the teams would head into halftime on equal terms, but in the 44th minute Mount hit a superb volley off a long, floated ball into the West Ham penalty area by Hakim Ziyech.

Things looked grim for the hosts at that point, as Chelsea are the best defensive team in the Premier League and hadn't allowed more than a single goal in league play this season. However, records are meant to be broken and in the 56th minute West Ham became the first team to score twice against Chelsea thanks to an opportunistic strike by Jarrod Bowen.

⚒ @WestHam are the first side to score more than one goal against Chelsea in a #PL game this season #WHUCHE pic.twitter.com/zF0FivJNgd

The home side weren't simply satisfied with a draw, though. A high-octane final 20 minutes led to chances for both sides, and in the 87th minute West Ham took the lead for good as Arthur Masuaku sent in a shot that looked like it was a cross, but it was enough to beat Edouard Mendy to the top corner.