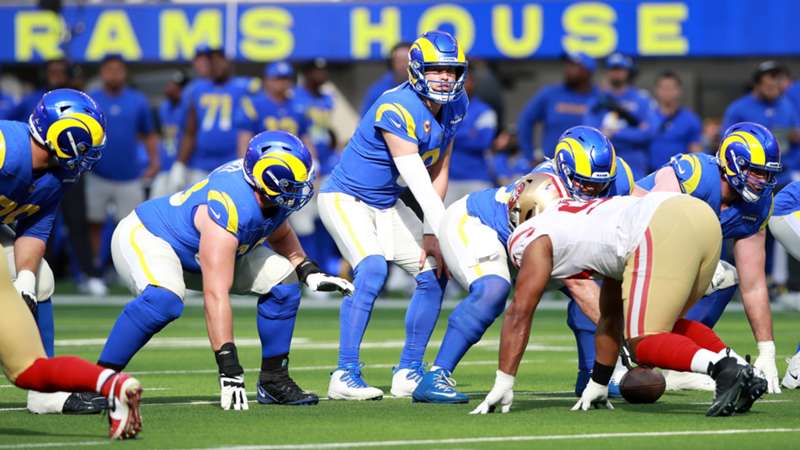 The final week of regular-season play completed the playoff picture.

Following the Las Vegas Raiders' overtime victory over the LA Chargers on "Sunday Night Football," Week 18 of the 2021 NFL season delivered on its promise to settle all remaining playoff races.

While some games went according to expectations, others veered toward to the dramatic. Perhaps the most shocking was the capitulation of the Indianapolis Colts, who fell to last-place Jacksonville. It wasn't a fluke, either — the Jaguars dominated throughout the game en route to a 26-11 victory and knocked the Colts out of playoff contention.

Meanwhile, the San Francisco 49ers left it until overtime against the NFC West champion LA Rams to book their spot in the postseason, as a stunning interception sealed the win.

Those were just two of the many highlights across the day's action as the playoff picture came into focus.

Here's the postseason seedings after the end of Sunday's action.

Click here to read about a tense Chargers vs. Raiders game, and read on below to re-live the biggest plays and highlights from Sunday's earlier contests.

49ers win with an interception

What a dramatic way to end a game, with Matt Stafford airing it out and Thomas grabbing the ball out of the air.

The Rams still win the division, but the result puts the Niners into the playoffs. Wow.

facebook twitter whatsapp
The Seahawks have helped the LA Rams, who have clinched the NFC West thanks to the Cardinals' loss.

Niners take the lead in OT

facebook twitter whatsapp
San Francisco couldn't get the TD to secure the victory, but have the advantage thanks to a field goal. What can the Rams do in response?

Bills will win the AFC East

Buffalo's up by 17 with less than four minutes to go.

facebook twitter whatsapp
With the Buccaneers routing Carolina, Brady once again shows he's among the best to have ever done it.

What a season for Tom Brady. pic.twitter.com/JLniqDdZvs

The Patriots are trying to steal the AFC East title from the Bills, and only a win against the Dolphins (plus Buffalo faltering) will help.

New England gets to within three points of Miami to keep things interesting.

Damien Harris powers in to make it a 3-point game! #ForeverNE

facebook twitter whatsapp
The Rams were less than 30 seconds away from clinching the NFC West, but the 49ers get to the end zone to keep their own playoff hopes alive.

So nice he did it twice.

Nobody open? No problem for @DangeRussWilson. He takes it in himself to put the Seahawks back on top.

COOPER KUPP IN FOR SIX! pic.twitter.com/rTntkPS9MJ

The Bucs have a two-TD cushion against Carolina.

NFC West is best for drama

The NFC West is still up for grabs!

Saints are inching closer to the postseason

The @Saints can smell a playoff spot... #Saints

New Orlean's Paulson Adebo snags the ball out of the air with one hand.

Paulson Adebo goes ONE HAND on the INT! #Saints

The Pats are facing the Dolphins with the possibility of snatching top spot in the AFC East. However, they're down 17-7 after this touchdown.

After review, it’s a touchdown for @stefondiggs 🙌

Bills get the early lead

facebook twitter whatsapp
Buffalo's taking on the Jets, and the Bills need the win to clinch the AFC East. Stefon Diggs' toes do the job to open the scoring.

After review, it’s a touchdown for @stefondiggs 🙌

Whoa! What a response by Russell Wilson!

The Seahawks QB got stripped for a TD on the opening play of the game against Arizona, but he redeems himself with a long bomb to Lockett for the major.

The Steelers fight their way into field goal range in OT against the Ravens, and the FG attempt is good!

CHRIS BOSWELL FOR THE WIN IN OVERTIME! #HereWeGo pic.twitter.com/07xZL67eiK

The Ben Roethlisberger era continues with the walkoff victory (as long as there's a winner between the Chargers and Raiders later tonight), and Baltimore's out.

Cardinals score on first snap of the game

Arizona forces a fumble out of Seattle QB Russell Wilson, and the Cards run the ball into the end zone. What a start in Glendale.

Arizona scoop & score on the first play of the game 🔥

The Tennesee Titans are the 1️⃣ seed in the AFC ⚔️ pic.twitter.com/szXw7hx3YD