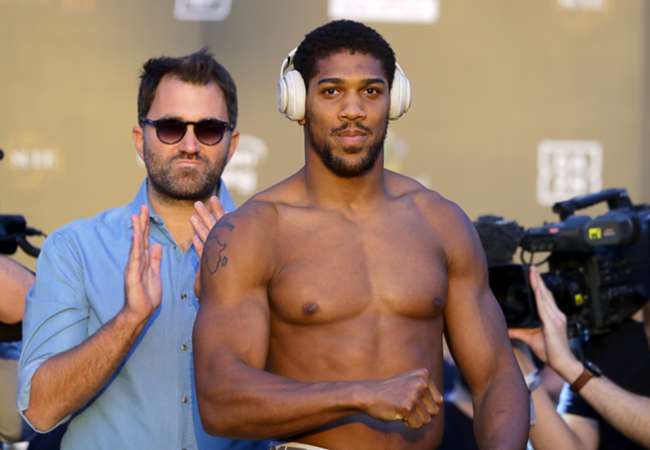 The possibility of Anthony Joshua bringing in a new trainer ahead of an expected early 2022 rematch against Oleksandr Usyk continues to be a hot topic of discussion after the 31-year-old Briton was seen in a number of gyms in the United States earlier this month.

Joshua lost the IBF, WBA, and WBO heavyweight titles to Usyk in a stunning display by the Ukrainian in September, leading to questions about the former champion's preparations. Speculation that Joshua was looking to add or change trainers has only become more intense in the weeks since, and on Tuesday Matchroom boss Eddie Hearn told the DAZN Boxing Show that nothing has been decided by the fighter.

"I think the one thing he didn't want to do is just sit at home and mope around you know, like, obviously an 'L' hurts everybody and it hurt AJ, and he's frustrated with his performance," Hearn told Ak and Barak. "He wants to look at ways to improve and he wants to make sure that he beats Oleksandr Usyk next time around."

Joshua accompanied Hearn to the American west coast while the promoter conducted business in the region, which Hearn said led to a number of fruitful encounters with coaches while also allowing "AJ" to get away from the intense spotlight in the United Kingdom.

"The trip was a little bit of holidaying, getting away, and obviously I was going out to that side of America anyway for the Mikey Garcia fight and others and meetings, and he still came along with a couple of friends," Hearn said. "He wanted to just go and look at other gyms, and he saw three or four trainers out here."

Among the trainers Joshua met with was Eddy Reynoso, who currently lists Saul "Canelo" Alvarez as a client. Hearn said Joshua even had a chance to step into the ring with Alvarez, which could prove useful down the line.

"It was a great experience for him," Hearn said. "He went into Canelo's gym, he watched Canelo spar. I think Canelo even had him in the ring for 20 minutes. They were talking about the [Usyk] fight. This is priceless for someone who likes to be educated on the sport like Anthony Joshua. I don't want him to overthink things, but he does overthink. And he needs to understand what went wrong."

Hearn lauded Joshua for already starting to look for ways to improve ahead of the as-yet unscheduled Usyk rematch — he "could have just gone off to Dubai or wherever," the Matchroom boss noted — but stressed that AJ will only "get one shot to get it right" after losing the tactical battle last month.

"Everything he's doing now is to prepare him for that rematch," Hearn said. "So, you know, will we see a change to the training team or an addition? Yeah, quite possibly. But he's in a great place because he really feels like that trip was invaluable, you know, sitting down with great minds."

As for who he would suggest to Joshua? Hearn feels that's a decision best left to the fighter.

"I'd say [go with] whoever fills you with the most confidence [and] whoever you have the most belief in. I would never personally recommend a trainer to someone in that respect, because it's different for everybody," he said.

He added that, ultimately, the onus will be on Joshua to perform regardless of who's in his corner.

"Honestly, what I recommend is someone who you believe in. He believes in Rob McCracken so, so much, you know, but clearly they didn't get it right," Hearn said. "And you have to take responsibility yourself. And I've said this to Anthony as well. It's not just, 'Oh, I blame the training team.' You're the guy in there, you knew what you had to do, really, and you didn't do it. You had a bad night. Usyk was brilliant. You didn't put the game plan together, and you boxed the wrong fight."

Watch highlights from Joshua vs. Usyk below.