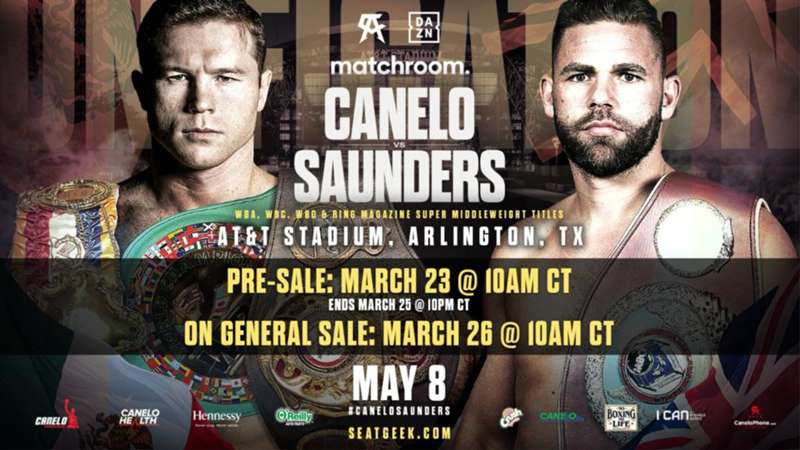 The men are aware of each other's strengths and weaknesses ahead of their highly-anticipated May 8 clash.

With the world still battling the coronavirus pandemic, a sense of normalcy is treasured almost above all else.

Saul "Canelo" Alvarez and Billy Joe Saunders aim to give boxing fans a little bit of normalcy when they square off in a super-middleweight unification bout in Arlington, Texas, on May 8. Not that there's anything normal about the fighters or the fight itself — the men hold three world titles between them and are considered among the best of the best in the sport.

But with 70,000 fans expected at AT&T Stadium for the fight, a return to the era of the big boxing spectacle is a welcome sight.

The motivation is clear for both men. A win on May 8 establishes the victor as the king at 168 pounds, with only IBF champion Caleb Plant standing in the way of undisputed glory.

What isn't known yet is how things will go down when the fighters step into the ring, as Canelo's unofficial title as the best pound-for-pound boxer in the world will face a stiff challenge against Saunders' undefeated record (30-0, 14 KOs).

For Canelo, the opportunity to continue adding to his legacy is something that cannot be understated. The Mexican superstar has made it clear that he wants to unify all the titles in the division, and defeating Saunders is the next step in that journey.

"It's really important to us to make history, and these fights are very important towards what we want to achieve in boxing," Canelo told Hearn. "I'm very happy to be on this path, and we are training at 100 percent, as always, to reach our goals."

Canelo knows that Saunders will pose problems, and he feels he'll be well prepared to deal with whatever the 31-year-old Brit can throw at him on May 8.

"I know what Billy Joe Saunders brings. He's a fast fighter who moves a lot. He's a lefty — a difficult opponent," Canelo said. "But at this level, I have to adapt to any style, and I'm ready to make history and ready for any style."

While both men have their goals, the respect between them is evident. Having acknowledged the juggernaut that Canelo has become in the sport, Saunders says he respects everyone he faces due to the nature of the profession.

"I respect every fighter who gets in the ring. I have to respect them because of the life that's put on the on the line," Saunders said. "As humans, we're all one, and I don't put myself beneath or on top of anyone, so I respect him as a fighter, but that's as far as it gets for my respect for anyone."

Watch the full press conference above and sign up with DAZN to watch Canelo vs. Saunders on May 8 (all regions except Mexico).