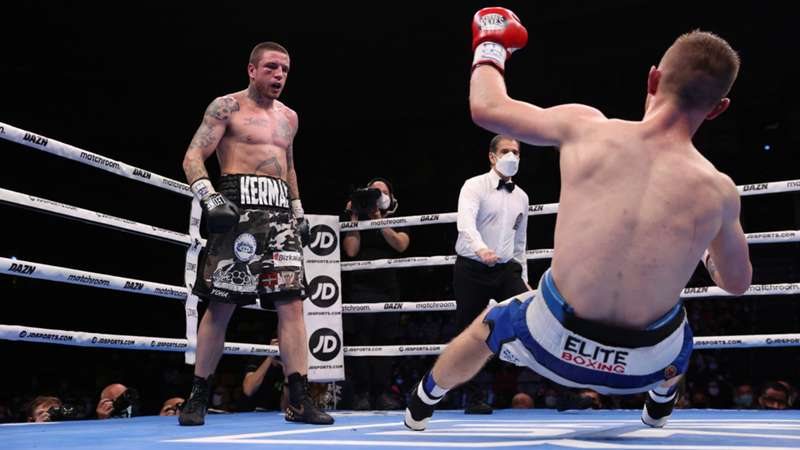 Watch Lejarraga vs. Flatley on DAZN

Kerman Lejarraga made a successful first defence of his European super middleweight title after knocking out Jack Flatley in round nine.

As soon as the opening bell rang Kerman Lejarraga came out on the front foot, asserted his dominance and sent Flatley to the canvas in the closing seconds after a left jab stunned the 27-year-old.

Flatley continued to endure a barrage of punches from Lejarraga and looked to use his footwork to keep his opponent at a distance. However, the champion was still able to land eye-catching shots in front of a raucous crowd.

With the fight quickly running away from Flatley, he tried to go toe-to-toe with Lejarraga, but he struggled to land any meaningful shots and was knocked down for a second time following a thunderous right hand in round eight.

It only seemed like a matter of time until the fight was stopped and that time came in the opening periods of the ninth when another right hand knocked out Flatley.

Following what was a brutal finish, Lejarraga showed his class as a champion by encouraging a raucous and hostile crowd to show respect to Flatley who showed real courage during a hard-hitting main event.

This knockout finish topped off a memorable night of boxing in the Basque country which included an impressive first round stoppage win for prospect Samuel Carmona and Campbell Hatton's first TKO in the professional ranks.

Kerman Lejarraga retains his European super middleweight title after knocking out Jack Flatley in the opening stages of the ninth with a powerful right hand.

A stoppage or knockout was inevitable after all the punishment Flatley had endured, but despite figthing in the middle of a hostile atmosphere in Bilbao, the crowd, led by Lejarraga, showed plenty of respect for Flatley who rose to his feet after receiving immediate medical assistance.

Round Eight: Jack Flatley knocked down for a second time

Kerman Lejarraga knocks down Jack Flatley for a second time after landing a right hand.

The challenger manages to beat the referee's count, but is then subject to another Lejarraga barrage.

The Spaniard also rocked Flatley with a left uppercut in the opening minute.

Kerman Lejarraga's left hand has continued to be a problem for Jack Flatley, but while it hasn't stunned him since the first, it's likely a knockout or stoppage for the champion will come via this particular punch.

Round Six: Jack Flatley throwing shots to no avail

Challenger Jack Flatley is trying his best to go toe-to-toe with Lejarraga, but his experience is certainly showing with the Spaniard landing the more eye-catching punches.

Flatley is throwing his own combinations, but is finding little success.

Jack Flatley's corner inbetween rounds predicted that Kerman Lejarraga will tire as a result of his fast start and that seems to the case.

The European champion has taken his foot off the gas, but in the closing minute landed a left uppercut which backed Flatley onto the ropes and unloaded a combination which the Brit managed to withstand.

Round Four: Jack Flatley's best round so far

Jack Flatley has produced his best round of the fight so far.

After absorbing a barrage of punches from Kerman Lejarraga, Flatley is looking to use his footwork to make the Spaniard work for his punches and slip away whenever he is being backed onto the ropes.

Both men are now nursing lumps under the right eye.

Kerman Lejarraga's left jab is proving a problem for Jack Flatley who is struggling to guard against the Spaniard's brutal power.

Flatley is trying all he can to keep at range against his opponent, but Lejarraga's punches are finding the gaps within his defence and causing physical damage.

Round Two: Kerman Lejarraga begins to wear down Jack Flatley

Kerman Lejarraga is landing plenty of dangerous punches and they are affecting Flatley whose legs at one stage stiffened.

There have been flashes of success from Flatley who managed to land a few jabs during the round.

Kerman Lejarraga went on the front foot and asserted his dominance on Jack Flatley by pushing the British fighter onto the ropes.

Then in the final few seconds, the champion stuns Flatley with a left jab, sending the challenger to the canvas who was saved by the bell.

Both fighters are in the ring and set to go head-to-head for the European super middleweight title.

The Bilbao crowd are firmly behind their hometown hero and they will be hoping he can produce a memorable performance in his first title defence.

Damian Biacho has retained his Spanish super middleweight title after Guillermo Rivero's corner threw in the towel at the end of round seven.

Biacho got off to a slow start in the opening two rounds, but the 20-year-old began to let his hands go in the third and breakdown Rivero's tight guard.

The champion managed to knock Rivero down four times during the contest, but a raucous crowd inspired the challenger to keep his title dreams alive, but after a left hook put Rivero down towards the end of the seventh, his corner didn't want to see the 35-year-old take anymore punishment and signalled to the referee to end the contest.

The Spaniard went to work on the much taller Marcouchi by targeting the body and as the contest progressed began to find openings for a hard hitting overhand right.

Alonso's power was proving too much for the Belgian who showed signs of damage and fatigue in the latter stages.

All three ringside judges scored the fight 80-72 in Alonso's favour.

Campbell Hatton gets the first stoppage of his career

This was by far Campbell Hatton's best performance as a professional.

The Manchester fighter looked sharper compared to any of his previous four fights. He sent his opponent, Attila Csereklye, to the canvas in the first round, but the Hungarian managed to beat the referee's count.

Come the second round a barrage of body shots and a left uppercut knocked Csereklye down for a second time and this time he couldn't carry on.

An impressive performance from Hatton with tougher tests to come.

Tonight's card is off to an explosive start with Samuel Carmona producing a first round stoppage against Luis Fernando Villa Padilla.

After scouting his opponent in the opening minute, Carmona landed a number of body shots and began to unload on Padilla which forced the referee to step in and stop the contest.

A strong display from Carmona in just his sixth professional fight.

Good evening and welcome to the Bilbao Arena in Spain where Kerman Lejarraga makes the first defence of his European super welterweight against Jack Flatley in tonight's main event.

But first there is a four-fight undercard which kicks off with a flyweight contest between Samuel Carmona and Luis Fernando Villa Padilla.

Stay tuned to DAZN News for live updates and results throughout the night.