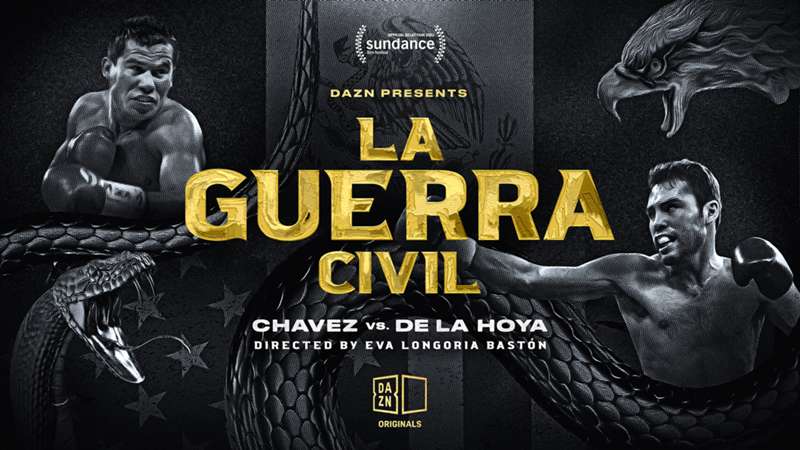 DAZN kicks off Hispanic Heritage Month not only with Canelo vs. Golovkin 3, but a new hint about a highly-anticipated documentary arriving on their platform.

La Guerra Civil, a documentary looking back at the historic boxing rivalry between Hispanic fight icons Julio Cesar Chavez Snr. and Oscar De La Hoya, will be available to subscribers of the DAZN sports streaming platform in the very near future after a fresh hint was dropped on social media.

The official DAZN Boxing Twitter account shared a small taste of the film, which was directed by Hollywood actress/producer Eva Longoria and made its debut at the 2022 Sundance Festival in January, and promised that the full feature was "coming soon".

La Guerra Civil is part of DAZN Studios' 2022 slate of several original documentaries looking back at the legends of sport and their respective rises to prominence.

Also announced by the company back in January were Ronnie, a biopic about legendary former Brazil striker Ronaldo, Green Lions, a look back at Cameroon's incredible journey at the 1990 World Cup, and Maradona: The Fall, an explosive look behind the scenes of the Argentine icon's failed drug test and subsequent fallout at the 1994 World Cup in the United States.

The sneak peek of La Guerra comes at the start of DAZN's month-long celebrations of Hispanic Heritage Month, which will see exclusive interviews, classic content and more become available to subscribers over the next four weeks, with additional HHM content being made available to all fight fans via DAZN's official YouTube channel.

“Sport has the power to inspire and connect people around the world, and evocative storytelling can bring us closer to its beating heart," said DAZN Chief Operating Officer, Ed McCarthy, in January.

"DAZN Studios is going to enable us to broaden our original programming offering with productions that not only drive deeper engagement with fans but create opportunities via licensing, distribution, advertising and commissions.

"We know that the way we tell stories never stops evolving. We already work with some of the biggest names and organisations in sport and film today, but as DAZN continues to grow, we also want to enable the next generation of filmmakers and invest in the future talent of sports storytelling.”