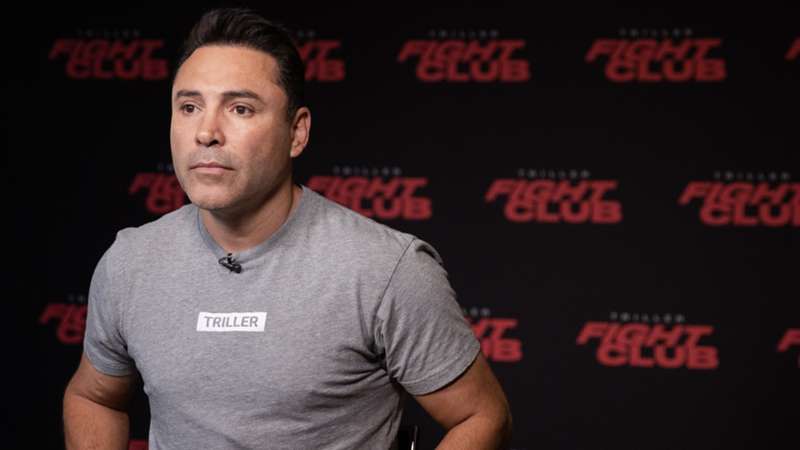 The long-awaited comeback for the "Golden Boy" has been delayed.

Oscar De La Hoya is out of the Sept. 11 exhibition fight with former UFC champion Vitor Belfort due to a positive coronavirus test.

ESPN's Mike Coppinger tweeted Friday that De La Hoya will be replaced by 58-year-old former heavyweight champion Evander Holyfield, pending approval from the California boxing commission. Coppinger said that the fight could be moved to a different state if California does not grant approval.

Source: Oscar De La Hoya has tested positive for COVID and he is out of his Sept. 11 fight with Vitor Belfort on Triller. Evander Holyfield is stepping in to fight Belfort. If California commission won’t approve Holyfield fight could move to another state

"Heavyweight fights are always the most exciting clashes, and this is a heavyweight fight between two true warriors," Kavanaugh said in a statement. "We really wish Oscar a speedy recovery, he's a champion and a warrior; we know he'll fight this and win. We look forward to seeing him in the ring on the anniversary of Fight Club's launch."

"The Golden Boy" took to Twitter to confirm he was out of the fight. A tired and woozy De La Hoya couldn't believe he contracted the coronavirus.

I am currently in the hospital getting treatment and am confident I will be back in the ring before the year is up. God bless everyone and stay safe.

"I mean, what are the chances of me getting COVID?," De La Hoya said. "I’ve been taking care of myself. This really, really kicked my ass."

De La Hoya had been teasing a comeback fight for nearly a year before finalizing the details to face Belfort in an eight-round exhibition at the Staple Center in Los Angeles. Instead, the world will have to wait a little while longer to see the "Golden Boy" in the ring once again.

Holyfield (44-10-2, 29 KOs) returns to the ring for the first time since a tenth-round TKO win over Brian Nielsen in May 2011. The 58-year-old holds two victories over Mike Tyson, and victories against George Foreman and Riddick Bowe.

Belfort, 44, is a former UFC light heavyweight champion. He was supposed to face "The Real Tarzann" Mike Holston on the Teofimo Lopez-George Kambosos Jr. undercard. The card got scrapped when Lopez was forced to pull out due to testing positive for COVID-19. This will be Belfort's second professional boxing match. In April 2006, Belfort knocked out Josemario Neves.