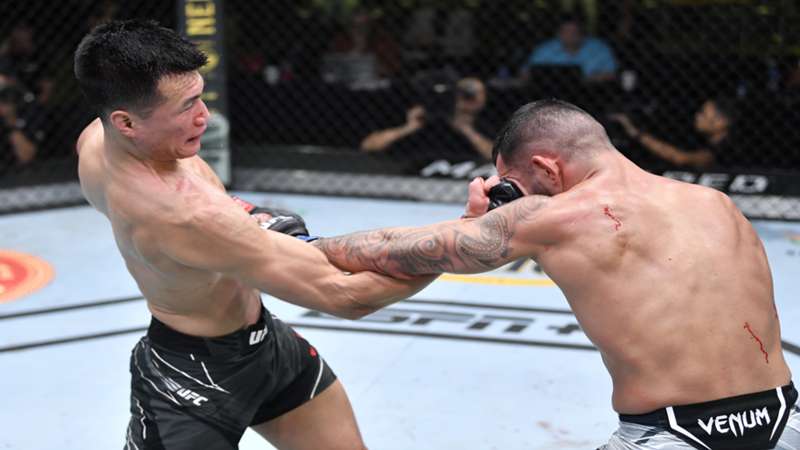 Chan Sung Jung gets back on track in a big way.

Well, Jung silenced those talks using his all-around game to defeat Ige via unanimous decision (49-46, 49-46, 48-47). After the fight, Jung received his black belt in Brazilian Jiu-Jitsu.

After an early striking battle, Jung took Ige down to the mat two minutes into the fight. The rest of the round featured good technical striking, with Ige landing the crisper shots.

The striking of Jung started to take its effect in the second round and changed the complexion of the fight. He stung Ige on numerous occasions with the left hand. Late in the round, Jung pressed Ige against the cage and secured the takedown. He took his back and attempted to lock in the rear-naked choke but was unsuccessful.

Jung began the third like he did the previous round in getting another takedown. Once again, he got Ige's back and looked for the rear-naked choke. Jung kept looking for ways to secure it, but Ige was staying active by moving his body around and grabbing ahold of Jung's wrist. Jung appeared to get the choke with seconds remaining, but Ige was able to escape before he fully locked it in.

Knowing he was down in the fight, Ige came back and controlled most of the fourth round by outlanding Jung and connecting on the harder shots. That changed with a minute to go as Ige threw a slow leg kick which Jung caught and put right back on the ground.

Ige fought for his life to start the fifth and final round knowing he needed a stoppage to win. He went swinging for the fences with every punch and landed a sharp left hook early in the round. Trying to change the momentum, Jung went for a takedown but was unsuccessful. Ige went looking for a takedown of his own but didn't have enough energy to muster it.

On the other hand, Jung had enough gas in the tank and took Ige down with two minutes to go in the fight. Ige tried every which way to get back to his feet, but Jung kept a body triangle on him to ensure that didn't happen to get the victory.

Jung (17-6) has now won three of his last four to put himself right back into the title picture at 145 pounds. For Ige, it is his second loss in three contests.