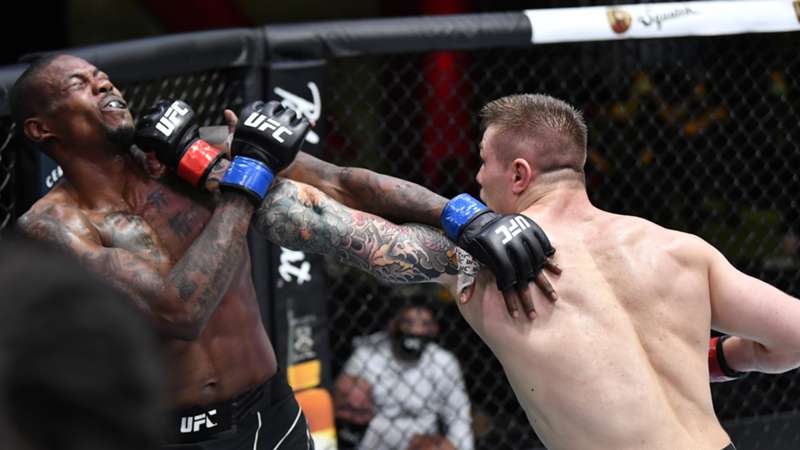 One half of the UFC 263 main event feels confident heading into the biggest fight of his life.

Marvin Vettori was 2-1-1 when he took on Israel Adesanya in April 2018. Things didn't go Vettori's way as he lost via split-decision.

From that point forward, Vettori hasn't suffered a defeat, winning five consecutive fights. That streak earned him a once-in-a-lifetime opportunity on Saturday night in the main event of UFC 263 as he meets Adesanya one more time. But this go-around is for the middleweight championship.

"I'm not your friend." 👀 The third installment of Embedded is live.

Before he steps into the Octagon with "The Last Style Bender," Vettori discusses what the judges saw that he didn't see a little more than three years ago, why he feels Adesanya is overhyped and if he's getting the proper respect heading into UFC 263.

DAZN: How excited are you as we're getting closer and closer to the fight?

Marvin Vettori: I'm very excited. I'm remaining really center, but I can't wait man. This is the opportunity of a lifetime. Twelve years come down to this moment and you better be sure I'm going to make the most out of it and I'm going to, become the first Italian UFC champion.

DAZN: You really don't see many MMA events in Italy. You don't see many Italian fighters get to the level that you're at. What would it mean to you to be the first Italian UFC champion?

MV: Everything man. It will mean everything. I just want to prove to people [and] every person in Italy that even if the odds are against you, we can do it. You just do what you're supposed to everyday, and you learn from it and you keep learning with an open mind. Things are going to happen day by day. Those days add up, you keep improving and you keep moving forward. That's all that matters and one day you will be where you want to be and then you're going to set new goals and so on.

DAZN: Why do you think we don’t see many Italians in combat sports?

MV: I don't know. A lot of Italians are getting getting softer over to be honest. Italy is getting soft for some reason. It's a hard road to pursue. There’s not anybody pushing you in like the UK or America where fighting is a thing. It'll be my mission to show people that this is the best sport ever and people should go for it

DAZN: At middleweight, you have provided the toughest fight for Israel Adesanya. What do you think the judges saw them give the previous fight for Adesanya?

MV: They scored the feints. They scored his movement, leg kicks and some of the jabs more than me having the center of the ring, me being the aggressor most of the time, me trying to push the pace of the fight. Even the significant strikes were really, really close with a difference that I was pushing him against the cage, and trying for takedown.

DAZN: What your mind has been the catalyst for the run you're on now?

MV: I knew where I belonged. I knew that I would become the best. That's my drive. I also knew that regardless of him being champion or not, I was going to face him again. That was not the main motivation but becoming the best in the world was my main motivation. Obviously, I want to settle the score and show that I'm the best in the world, and beat him and beat him again.

DAZN: Did you watch his fight with Jan Blachowicz back in March?

DAZN: What did you make of that fight and Adesanya’s performance?

MV: It was just a confirmation of a lot of things that I knew. Jan did a lot of good things. He was seeing a lot of things that he’s always trying to do. He won the fight clearly in my eyes. They (UFC) tried to make Israel bigger than what he is. They tried to build this picture where like he's taller than he really is. They listed him at like 6-4. They built this image of him. It's mainly hype. I never believed that hype. I wouldn't even believe my own hype, I believe in hard work. That's it. I believe in what I do everyday in training. I believe nobody's hype. Jan went on and beat him. He's like, ‘You want to come up here, I'm the champion right here. Come here to daddy, I'll show you how it's done.’ And that's what he did. It was just a confirmation a lot of things that I already knew. It's going to look the same on Saturday.

DAZN: Do you think he's overhyped?

DAZN: It seemed like the route was going to be the UFC wanting to make Israel and Robert Whittaker first. Then Robert wasn’t ready to fight and then they offered you the opportunity. Do you feel like everyone's under estimating you because they expected Robert even you gave him his toughest fight at 185?

MV: The end of the day, I don't give a damn what people think. I was ready when Robert wasn’t.

DAZN: What would the win mean for you just on a personal level to become the UFC middleweight champion?

MV: Just proves that I can do whatever I set my mind to do more than everything else, to be the best at something and to prove to the world that I’m the best.

DAZN: How do you win the middleweight title at UFC 263?

MV: I see him being frustrated in there and me capitalizing on some of the mistakes that he makes. I eventually finish him and make it clear that I’m the best middleweight in the world.