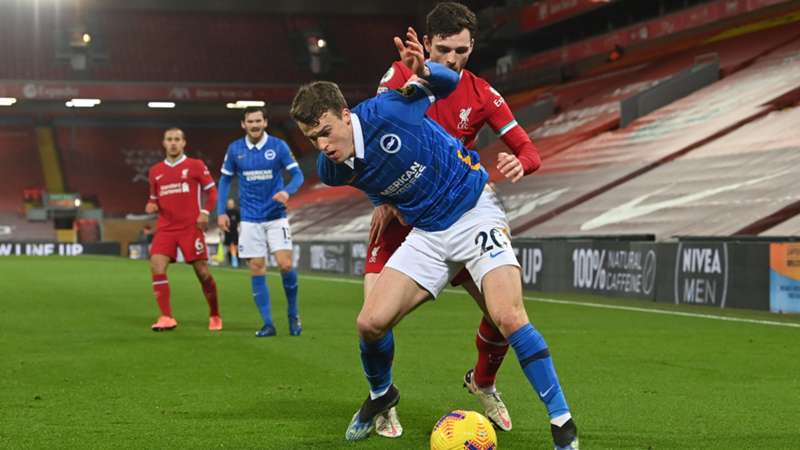 A bleak outing for the Reds resulted in a 1-0 loss to the visiting Seagulls.

A recent spell of positive results came to a crashing halt for Liverpool as the defending Premier League champions fell 1-0 to visiting Brighton & Hove Albion on Wednesday.

The Reds had rung off 3-1 victories against West Ham and Tottenham, respectively, over the past week, sparking hope that a recent run of poor results had come to an end. However, Wednesday's match saw Liverpool outshot and outchanced by the 15th place Seagulls, who held on for their second straight 1-0 victory over a "Big 6" club after their win against Spurs on the weekend.

For Liverpool left back Andy Robertson, the result was a fair one given the run of play.

“The better team won, Brighton were better at pretty much everything,” Robertson told BT Sport after the match. “They pressed us, won the ball back and created chances. First half was OK, it was a nothing game and you got the sense that one goal was going to be enough to win it. In the last three games at home we have been really disappointing and we have to get back to it. We are a long way off it.

“Brighton played four centre-backs and they were all outstanding but we have been disappointing. We are not finding the way to win.”

"[Brighton] were fresher than us tonight and did more good things than we did," Klopp said in his post-match press conference. "We lost too many easy balls. The best way to defend Brighton is to keep the ball, to play football yourself and when we did that, we had control at least but didn’t create a lot.

"I said now plenty of times in all the interviews outside, for me the team looked tonight – and it’s long ago we looked like this – fatigued, mentally fatigued and that leads to not the best legs as well. It was a tough week and today we were not fresh enough, that means then [not] good enough to break the formation of Brighton. In the end, they scored a goal, had other chances, we kind of as well, but they scored and that's why they deserved to win."

It'll only get tougher for Liverpool, who sit in fourth place after Wednesday's match. On Sunday the Reds will face league-leading Manchester City, who are seven points ahead of Klopp's men with a game in hand.

"The gap to City, I know, I'm manager of Liverpool and I have to say [because] you always ask and we were champions last year, so I have to say, ‘Yeah, oh my God, we want to be champions…’ Yes, we want [that], but you need the games for it, you need the performances for it, and we don’t have," Klopp said. "So, that's the truth as well. We fight for other things, we fight for three points. It is not decided yet who will get the three points on Sunday, so we have to play better and we will try as well. Then we will see."