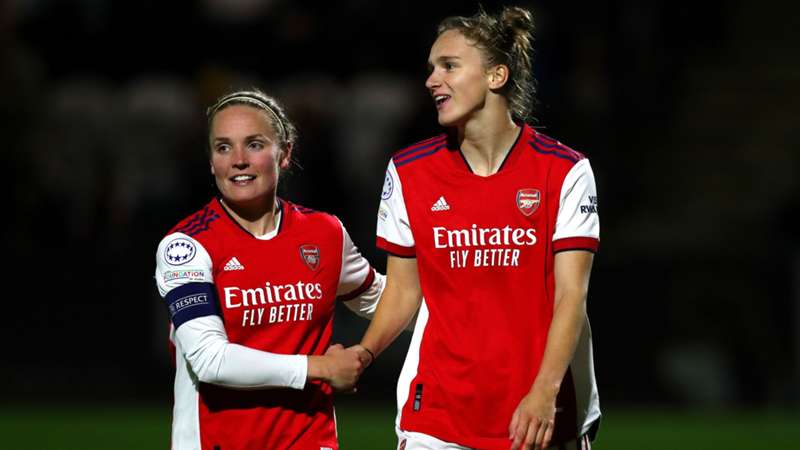 The Londoners took overcame a spirited visiting side.

The Gunners were clinical on the night, with goals coming from four different players. Kim Little, Tobin Heath, Vivianne Miedema and Leah Williamson were all on target for the hosts, who managed the flood of goals despite actually being outshot 12-10 by their opponents.

What made the difference was the quality of chances the Gunners created, and they ended the match with a 7-4 advantage in shots on target.

Little got the scoring underway just after the 20-minute mark, stepping up to take a penalty kick after Hoffenheim's Michaela Specht's wild clearance attempt resulted in a foul inside the visitors' 18-yard box. Little calmly sent the goalkeeper the wrong way with her side-footed effort, which nestled into the lower right corner to give the home side the lead.

Arsenal would double their lead in first-half stoppage time, with Heath finishing off a nice sequence that also involved Katie McCabe and Miedema. McCabe sent a probing ball into the Hoffenheim area, which was smartly nodded down by Miedema and into the path of a wide open Heath, with the American international easily sweeping into the net.

The match was put out of reach soon after the halftime break, as Miedema nabbed a goal of her own after previously having played the role of provider. In the 51st minute, Arsenal's Jordan Nobbs hit a hard shot from distance that forced a one-handed save from Hoffenheim 'keeper Martina Tufekovic.

With Tufekovic still prone from her diving save, the ball bounced invitingly for an onrushing Miedema to head in with the net unguarded.

Arsenal added a fourth goal to their tally in the 87th minute as Williamson powerfully headed a McCabe corner kick past Tufekovic on a near-post run.

The result means Arsenal and Hoffenheim have identical 1-0-1 records through two matchdays, with each team scoring five and allowing four. The Londoners hold the head-to-head tiebreaker, and they'll head into Matchday 3 in second place in Group C, behind leaders Barcelona.

Up and running in Group C 🤩@UWCL 🏆 pic.twitter.com/NvQUs4pJAc

Elsewhere on Thursday, Bayern Munich were 4-0 winners over BK Häcken, led by a pair of strikes by Lea Schüller inside the first 11 minutes. However, Bayern could not take over first place of Group D as leaders Lyon prevailed 5-0 against Benfica thanks to a brace by Kadeisha Buchanan and additional goals by Danielle van de Donk, Melvine Malard and Catarina Macario.

Additionally, the aforementioned Barca remained perfect with a 2-0 victory at HB Køge.