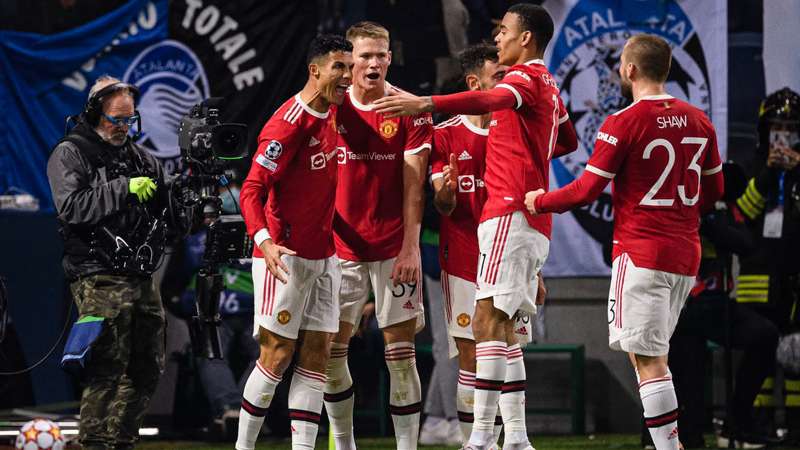 The Red Devils superstar lifted his side to a crucial point.

A pair of Cristiano Ronaldo goals powered Manchester United to a 2-2 draw at Atalanta on Matchday 4 of the 2021-22 UEFA Champions League on Tuesday.

Similar to his heroics against La Dea on Matchday 3 when United fought back for a 3-2 win, Ronaldo's goals helped his side claim a crucial point.

Ronaldo scored in added time of each half on Tuesday, nullifying goal's by Atalanta's Josip Iličić and Duván Zapata.

The hosts got on the board first, with Zapata serving up a cross in the 12th minute to Iličić near the penalty spot. The Slovenian struck a first-time effort with his left foot that stayed low, forcing Manchester United goalkeeper David de Gea to dive to his right. De Gea got his hands on the ball, but the power of the shot was too much to handle as the ball slipped under the falling goalkeeper.

The teams then traded chances for most of the remainder of the first half until stoppage time, when Bruno Fernandes and Ronaldo combined brilliantly in front of the Atalanta goal for United's equalizer. The goal was Ronaldo's 126th in all competitions for United, and it extended his group-stage goal-scoring streak to four games.

Despite the visitors regaining the momentum just ahead of the halftime break, it was Atalanta who would find the next goal.

After being the provider on the game's opener, Zapata became the scorer on his team's second. In the 56th minute, the 30-year-old found himself in alone on goal after a lofted ball by José Luis Palomino, and Zapata was able to put a shot over de Gea before the United defence could intervene.

Zapata's goal boosted the belief around the Gewiss Stadium that the Italian side could secure a win after blowing a two-goal lead at Old Trafford two weeks ago, but Ronaldo had other plans.

The 36-year-old once again left it late, but in the first minute of stoppage time Ronaldo found the equalizer. After Ronaldo dribbled his way into several Atalanta defenders at the top of the penalty area, the ball fell to Mason Greenwood, who collected with a deft touch and flicked it back to his teammate. Ronaldo didn't hesitate, volleying the ball through a number of players and past a diving Juan Musso to bring the teams onto level terms.

It was the second time in as many matches that Ronaldo scored late to snatch points from Atalanta, this time securing a road draw to keep United atop Group F.