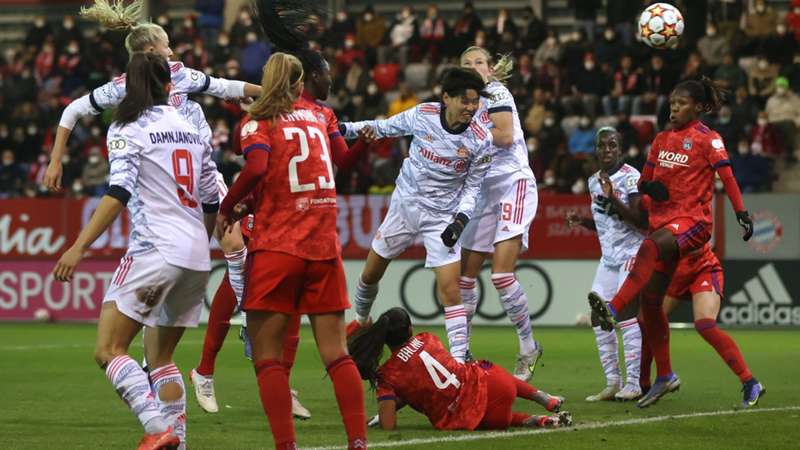 It took a second-half set-piece to boost the German side to victory.

The teams met again on Wednesday, this time in Munich, with a second-half goal by Saki Kumagai powering the German side to a 1-0 victory over Lyon on Matchday 4.

As the scoreline suggests, there was little between the sides throughout the match. However, both teams struggled to create clear-cut chances as defence was the order of the day, and it took a well-executed set-piece to decide a winner.

Bayern's breakthrough came in the 69th minute when Kumagai hit a powerful header to put her team ahead. The longtime former Lyon player rose highest to meet a corner kick, nodding the ball past goalkeeper Christiane Endler for the game-winner.

Kumagai's goal came off Bayern's first shot on target, illustrating the close nature of the match. The home side was buoyed by the strike and put more pressure on Lyon's backline immediately after grabbing the lead, but outside of a short flurry, there wasn't much else of note on the attacking end for the Germans.

A late push by Lyon yielded equally little for the visitors, who see Bayern climb to within two points of their lead atop Group D with two matches left to play.

Elsewhere, Barcelona ran out 5-0 winners at Hoffenheim, maintaining the Catalans' three-point cushion atop Group C. Barca got goals from five different players as they remained perfect through four matches.

The team chasing Barcelona, Arsenal, was also on the winning end of a big scoreline. The Gunners were dominant in a 3-0 home victory over HB Køge, with Vivianne Miedema and Lotte Wubben-Moy scoring in the final 10 minutes for the London side.

Wednesday's other match featured the two bottom teams in Group D, with Benfica claiming a 2-1 victory at BK Häcken. The Portuguese outfit left it until stoppage time to find the winner, with Catarina Amado's late goal the difference.