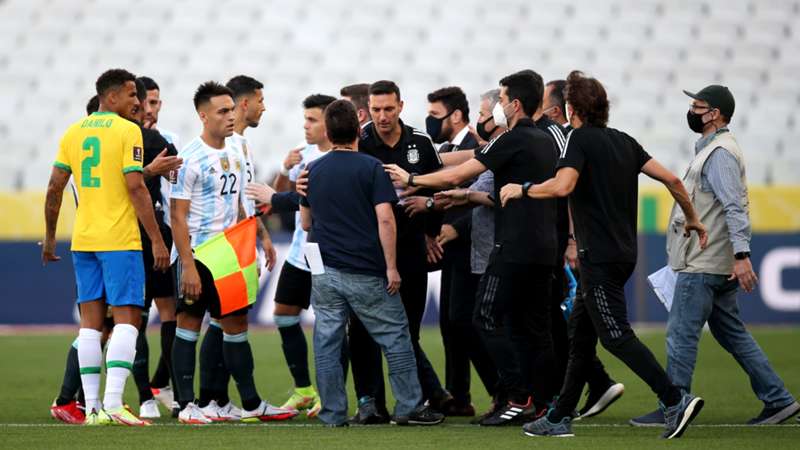 The Brazil vs. Argentina rivalry took on a whole new wrinkle as a World Cup qualifying match was suspended on Sunday after health officials walked onto the pitch during play in an attempt to stop four Argentine players from participating.

At issue is Brazilian COVID-19 quarantine rules, which state that visitors who spent time in the United Kingdom in the 14 days prior to entering the South American nation must self-isolate for two weeks. Four players on Argentina's team are employed by Premier League clubs — Emiliano Buendia and Emiliano Martinez (Aston Villa), and Giovani Lo Celso and Cristian Romero (Tottenham) —  and thus must adhere to the 14-day quarantine entering Brazil.

Brazilian health regulator Anvisa released a statement hours prior to kickoff claiming the Argentine foursome did not properly state their previous locations when filling out their immigration forms, running afoul of the rules.

"Anvisa considers the situation a serious health risk and so has asked local health authorities to determine the immediate quarantine of the players, who are stopped from participating in any activity and should be prevented from remaining on Brazilian soil," Anvisa said in a statement, as quoted by Reuters.

The players were able to travel to the Corinthians Arena in Sao Paolo for the match, where health officials elected to enter the pitch less than 10 minutes after kickoff. Martinez, Lo Celso and Romero were in the starting lineup and eventually walked off the field with the rest of the Argentina team and staff.

The match was officially suspended shortly thereafter, with CONMEBOL confirming via Twitter that all decisions pertaining to World Cup qualifying are the responsibility of FIFA.

"The referee and the match commissioner will submit a report to the FIFA Disciplinary Committee, which will determine the steps to be followed," the confederation tweeted. "These procedures strictly adhere to current regulations."