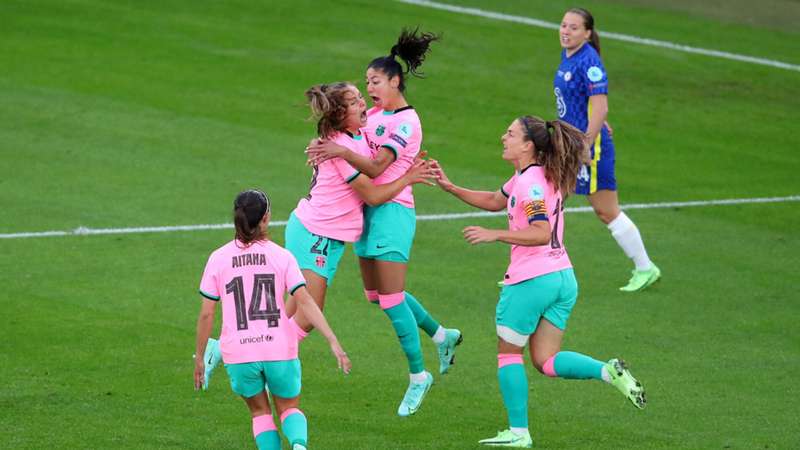 The Spanish outfit won its first UWCL title with a convincing victory.

A frantic opening 36 minutes propelled Barcelona to a 4-0 victory over Chelsea on Sunday, giving the Catalans their first-ever UEFA Women's Champions League title.

Barca struck inside the opening minute, forcing a freak own-goal by Melanie Leupolz just 35 seconds in after hitting the crossbar just seconds prior. The stunning start set the tone for the rest of the first half as Barcelona used a high-energy press and some opportunistic finishing to put the game out of reach well before the halftime break.

Alexia Putellas, Aitana Bonmati, and Caroline Hansen all added to Barca's tally, giving the Spanish side a four-goal lead at the 36-minute mark. A shellshocked Chelsea managed to get to the half without giving up any more goals, but the damage had long been done by that point.

A much-improved second half by the Londoners did little to close the gap between the teams as Barca was content to sit on the lead and allow Chelsea to come at them. In the end, the giant mountain was just too big to climb for the Blues, giving Barcelona the victory and the title.

🎉 BARCELONA ARE CHAMPIONS OF EUROPE! 🎉#UWCLfinal | 🏆🔵🔴

DAZN provided up-to-the-minute commentary and analysis of Sunday's match. Here's how it all went down.

facebook twitter whatsapp
That's it! The match has ended and Barca have won their first UWCL title!

facebook twitter whatsapp
Both teams now seem to have accepted the result, although Chelsea's still giving a half-hearted effort to find at least a consolation goal.

Chelsea's been in control this half, but the final product has been lacking. With just a quarter-hour left, you'd expect the kitchen sink to be thrown pretty shortly.

Chelsea has had the lion's share of the ball in this half, as Barca seems all too happy sitting on the four-goal lead without taking any risks.

52' Chelsea's much more composed to start this half

The Blues are very direct and purposeful in the opening stages of the second half.

Will it be enough?

Outside of a five-minute stretch, it's been one-way traffic for Barca.

It's hard to see a way back for Chelsea, but the Blues will have 45 minutes to pull off a miracle.

facebook twitter whatsapp
Chelsea 0-4 Barcelona
Martens dances down the left and drives in toward goal while balancing on the byline before she crosses for a tap-in by Hansen. Barca are dominant.

31' Match has slowed down

Barca has settled into possession and toned down the frantic pace of the opening 20 minutes. With a three-goal lead, the Catalans are quite comfortable letting Chelsea try to take the ball from them.

Some wonderful work sees Bonmati receive the ball at the top of the box and use a superb first touch to free herself to slide the ball under an onrushing Berger.

facebook twitter whatsapp
Chelsea 0-2 Barcelona
It's a calm finish by Putellas, and Chelsea have a mountain to climb.

facebook twitter whatsapp
The Catalans will have an opportunity to go two up after a player is taken down in the box.

8' Chelsea growing into the game

facebook twitter whatsapp
The Blues are seeing more of the ball and appear to have gotten over the initial shock of the opening moments.

facebook twitter whatsapp
The lead is nearly doubled as Barcelona's press is too much for Chelsea so far. Only a decent save by goalkeeper Ann-Katrin Berger has spared Chelsea's blushes.

Barca start off with a bang, first striking the crossbar then forcing an own-goal on the subsequent goalmouth scramble!

⏳ It's thrilling, end-to-end stuff in the #UWCLFinal after @FCBfemeni took the lead inside 35 seconds 🤯pic.twitter.com/gwx1QIfEPL

A dream start for the Catalans but Chelsea look shellshocked.