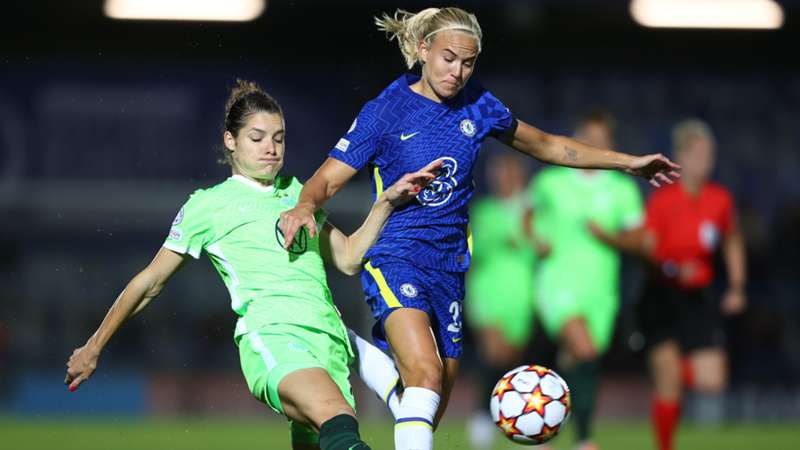 It was a goal-fest in London on Matchday 1.

It took a stoppage-time goal to spare Chelsea's blushes as the Blues pulled off a 3-3 comeback draw against visiting Wolfsburg in the UEFA Women's Champions League on Wednesday.

The English side were the masters of their own fate as they committed three egregious errors that led to all three Wolfsburg goals, but Pernille Harder salvaged a draw for Chelsea moments before the final whistle.

The hosts actually started the match on the front foot, playing a very direct, high-pressure style that kept the German side pinned in their own half for most of the first quarter-hour. It was during this stretch that Chelsea took the lead as Sam Kerr got on the end of a lobbed ball and proceeded to chip the goalkeeper from the top of the 18-yard box.

At 1-0 up inside 15 minutes and with the opposition on their heels, it looked like Chelsea were in complete control. However, they would produce a pair of horrific misplays within the next 20 minutes that turned the game on its head, as Wolfsburg's Tabea Wassmuth and Jill Roord were each beneficiaries of defensive miscues that allowed them to score and give their team the lead heading into the half-time break.

The second half started no better for the home side, as Wassmuth was once again gifted an opportunity at goal just three minutes after the restart and made no mistake in firing home her second of the match.

Down two goals, Chelsea's intensity never wavered even though they remained fragile at the back, but they were able to stabilize things enough to go on the offensive, and in the 51st minute Bethany England smashed home a loose ball from in close following a corner kick.

With the crowd at Kingsmeadow urging them on, Chelsea pushed for the late leveller, which came deep into stoppage time through former Wolfsburg star Harder. The 28-year-old pounced on a sloppy touch by a Wolfsburg defender inside the penalty area and hit a shot right through the goalkeeper's legs, sending the crowd into raptures as the comeback was complete.

Meanwhile, all three of the other Wednesday matches in the Women's Champions League were won by the visiting sides. Real Madrid earned a 1-0 victory at Zhytlobud-1 Kharkiv thanks to Lorena Navarro's 33rd minute strike, Juventus were 3-0 victors at Swiss side Servette, and PSG ran out 2-0 winners at Breidablik.

DAZN News provided live commentary and analysis from the Chelsea vs. Wolfsburg match. Here's how it happened:

facebook twitter whatsapp
What a barnburner. It wasn't the prettiest of football, but opportunism reigned and the teams split the points.

facebook twitter whatsapp
Chelsea 3-3 Wolfsburg
This time it's a Wolfsburg error that leads to a goal as Chelsea's overwhelming pressure forces a poor touch that's pounced on by Harder and smashed between the goalkeeper's legs.

PERNILLE HARDER COMPLETES THE COMEBACK AGAINST HER OLD CLUB 🔥

facebook twitter whatsapp
The hosts now know exactly how much time is left to get the equalizer.

facebook twitter whatsapp
Chelsea's still having trouble breaking down the visitors' defence, and they've looked susceptible to counters even while playing well.

facebook twitter whatsapp
The home side are continuing to push forward to look for the equalizer, which creates openings for Wolfsburg to counter. It makes for a frantic game, but an entertaining one.

facebook twitter whatsapp
Chelsea 2-3 Wolfsburg
The hosts respond quickly as England pokes it home from in close following a corner. No celebration as the team races back to the halfway line to get the match back underway.

THIS GAME IS A THRILLER 🍿

facebook twitter whatsapp
Chelsea 1-3 Wolfsburg
Another woeful defensive play dooms Chelsea, this time it's an underhit backpass to the goalkeeper that's easily intercepted. Wassmuth does wel to finish from the tight angle, but that kind of giveaway cannot happen at this level.

facebook twitter whatsapp
Chelsea started great and took the lead early, but two defensive nightmares have not only put Wolfsburg ahead but allowed the Germans to really settle and grow in confidence. The hosts now have it all to do in the second 45.

facebook twitter whatsapp
Another defensive nightmare from a short goal-kick routine gifts Oberdorf the chance to tee up Roord to turn this game on its head! Chelsea 1-2 Wolfsburg

Emma Hayes is FUMING after Chelsea fail to pass out from the back 😤 2-1 to Wolfsburg.

facebook twitter whatsapp
Leupolz forces a fingertips save from Schult in the Wolfsburg goal, as Chelsea have been back on top since conceding an equaliser out of nowhere.

facebook twitter whatsapp
Completely against the run of play, a defensive lapse from the home side allows Wassmuth to nip in between keeper and defender before slotting into an empty net. 1-1!

Waßmuth capitalises on a Chelsea error 😱

SAM KERR CHIPS THE KEEPER AND CELEBRATES IN STYLE 😎

9' Free kick just outside the box

Guro Reiten charges onto a Pernille Harder pass and gets taken down just outside the penalty area.

The ensuing free kick by Ji So-yun appears to be headed for the lower near corner of the net, but a good save by the Wolfsburg 'keeper stops an early goal.

3' Chelsea off to the races

Team news is in! 😍@MarenMjelde is back in the squad for the first time in seven months! 👏#UWCL #CFCW pic.twitter.com/LhcmZW3pcf