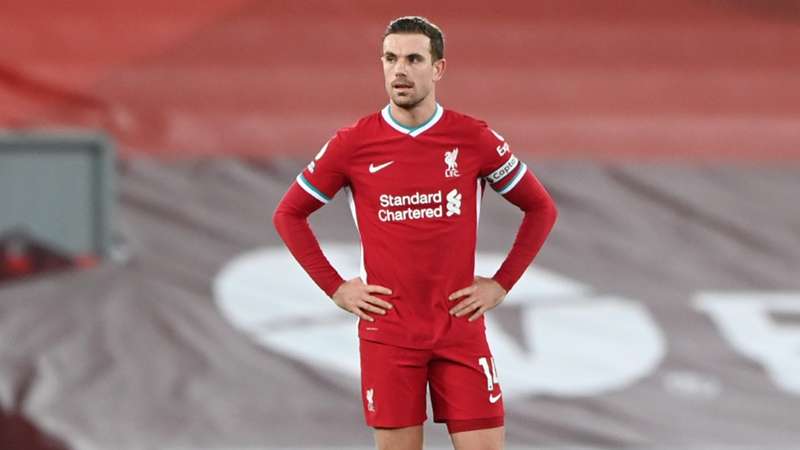 The midfielder stills holds out hope that the Reds can mount a title challenge despite the loss.

Liverpool are now 10 points behind league-leading Manchester City after a crushing 4-1 defeat to the Sky Blues on Sunday.

The match was marred by costly mistakes from goalkeeper Alisson, which gifted City two goals after Liverpool had kept pace for over an hour. With the win, City moved to 50 points on the season while the Reds remained at 40, with Manchester United and Leicester City also standing between the defending champions and Pep Guardiola's table-topping side.

For Jordan Henderson, Liverpool ultimately let themselves down despite keeping things close for most of the match.

"The end result I didn't really think reflected the performance, to be honest," Henderson said. "But [we] made mistakes in the wrong moment, and we got punished. City are a very good side, especially going forward, and they punished us when we did make the mistakes. But, overall, I think actually, if you look at just the performance, I thought the performance for the majority of the game was pretty good. [We] competed really well, it was more like the performance we're used to.

"But, like I say, in the wrong moment, mistakes cost us."

Alisson misplayed two seemingly easy clearances in the space of three minutes, with each resulting in goals for City. The quick strikes proved deflating and fatal to a Liverpool side that needed a result from Sunday's match. While disappointed in the outcome, Henderson feels Liverpool were hard done by on the scoresheet.

"When you get beat, it's always disappointing, especially in the manner we did in the end. It's never nice. It's hard to take now, but in football, you've got to move on quickly," he said. "I didn't think we deserved to lose by that much, but then again, we've made costly errors that have cost us, so we can't have any arguments, to be honest."

Next up for Liverpool is a trip to Leicester on Feb. 13. It's another opportunity for the Reds to rein in a team above them in the standings — one that Henderson says cannot be overlooked.

"We've got a full week to get it out of our system, train properly – which we haven't had for a while," the Liverpool captain said. "So we need to use it the best we can this week to get prepared for a tough game against Leicester."