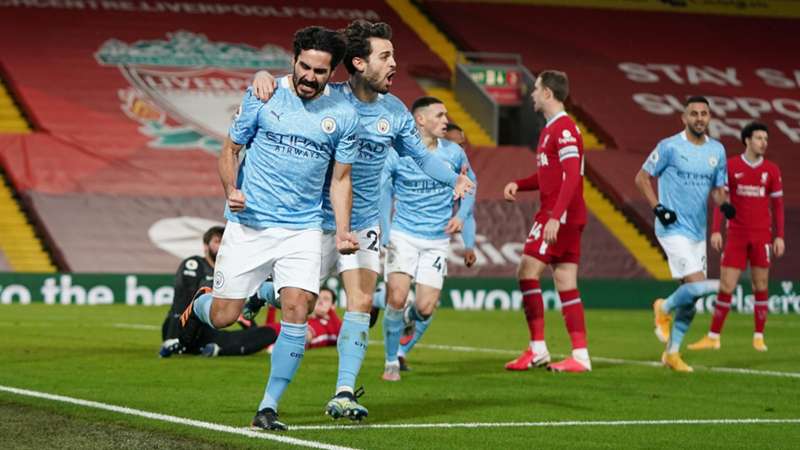 The match was blown open in the final 20 minutes, helped along by crucial giveaways from the Reds goalkeeper.

A pair of mistakes by goalkeeper Alisson was the difference as Liverpool fell 4-1 at home to Manchester City on Sunday.

Ilkay Gundogan and Raheem Sterling were the beneficiaries of Alisson's blunders, which came at 73 and 76 minutes, respectively, after the teams were tied 1-1 and seemingly on the way to a draw. Gundogan also had a 49th-minute strike as he redeemed a first-half penalty miss, while Phil Foden added an exclamation mark to City's victory seven minutes from full time.

Liverpool managed to keep things interesting for most of the match, with Mo Salah's emphatic penalty putting the teams on level terms just after the hour mark. Still, City's opportunism combined with Alisson's ill-fated giveaways were the story of the match.

The result sees City go five points clear at the top of the Premier League standings, while fourth-place Liverpool missed an excellent opportunity to make up ground on the teams ahead of them.

DAZN News provided up-to-the-minute commentary and analysis of Sunday's match. Here's how it all went down.

facebook twitter whatsapp
That's it! A big second half decided the match as City extend their lead atop the table.

facebook twitter whatsapp
4-1 City.
It's anabsolutely screamer by Foden, who cuts in from the right wing and blasts from 12 yards to give City a three-goal cushion now.

Alisson makes another fatal error, this time scuffing a clearance directly to Silva. The City man scoops the ball up and over the Liverpool keeper for Sterling to head in from a yard out.

This match is over.

It's a bit of a calamity for Alisson as he clears the ball directly to Foden, who dances into the area and puts the ball on a platter for Gundogan to tap in.

71' Stones finds the back of the net

facebook twitter whatsapp
The City defender knocks home a cross off a free kick... but it's judged to be offside. No goal.

facebook twitter whatsapp
1-1.
The Liverpool striker takes a wide run-up before absolutely smashing the ball high into the net.

facebook twitter whatsapp
It's the home side's chance to step up to the spot after Salah is hauled down.

facebook twitter whatsapp
1-0 City.
It's redemption for the City man as he pounces on a rebound inside the six-yard box.

GOAL! Gundogan makes up for his missed penalty by pouncing on a rebound!#LIVMCI pic.twitter.com/VduA6UB1AJ

It hasn't been too eventful a half, but some big moments have defined the opening 45 minutes. Gundogan's miss will be the talking point, but Liverpool taking 24 minutes to get a look at goal should not be forgotten.

All in all, an entertaining opening half of football.

That was dreadful. The City man steps up and hits a right-footer way over the goal.

Liverpool's been let off the hook.

facebook twitter whatsapp
The City keeper does well to punch the ball over after a wicked strike by Firmino. We're starting to see some action now.

facebook twitter whatsapp
Mané nods an Alexander-Arnold cross over the bar. It wasn't a great chance, but it's still Liverpool's first real look at goal so far.

15' City carrying most of the play

Through the first quarter-hour, it's been the league leaders who are in the front foot. Possession is 62-38 for City, with the Sky Blues outpassing the home side by 50 passes.

The Reds to face @ManCity 👊🔴

Your City line-up for Anfield! 💙