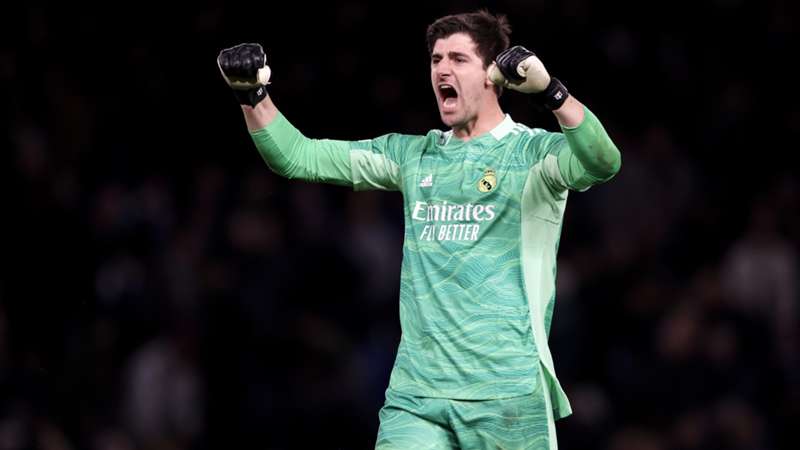 The 6-foot-7 shot-stopper was a giant in goal for Madrid.

Tibault Courtois put his team on his back as the goalkeeper put on a masterclass in leading Real Madrid to a 1-0 victory over Liverpool in the 2021-22 UEFA Champions League final.

The 'keeper turned away nine shots by the English side, several of which seemed destined for goal as Madrid did just enough to claim their 14th Champions League title.

Liverpool's attack was much more fluid and inventive than that of the Spanish giants, as the Reds spent large swaths of time in the Madrid half. The Reds' danger men, Sadio Mané and Mo Salah, were each denied of surefire goals by Courtois, who stood taller than his 6-foot-7 frame on the night.

Amid mounting frustration by a Liverpool side that created chances to no avail, Vinicius Jr. proved clinical in his lone shot on target as the Madrid attacker put away a tidy finish from in close in the 59th minute. The goal piled more pressure on the English side, who responded positively but couldn't find a way past Real's big Belgian.

Ultimately, Madrid were outshot 24-4 (9-2 on target) but it didn't matter, as Vini's strike just before the hour mark was the difference between the sides.

REAL MADRID ARE CHAMPIONS OF EUROPE FOR A 14TH TIME 🏆 pic.twitter.com/vkP6C7VUa6

DAZN provided running commentary and analysis of Saturday's match as it happened, which can be found below.

facebook twitter whatsapp
It's over! A dominating performance from Thibaut Courtois leads Real Madrid to their 14th Champions League title.

facebook twitter whatsapp
The Liverpool attacker does extremely well to get himself past the defence, but his tight-angle shot is knocked away by the Madrid 'keeper.  Frustration for the Premier Leaguers.

80' Pressure being piled on now

facebook twitter whatsapp
Liverpool's searching for the equalizer, which has stretched play. Can Madrid capitalize and put the game out of reach?

Here's a look at Vini's goal

Vinícius Júnior steals in at the back post to tap home from close range ⚽️#UCLfinal pic.twitter.com/owgAzrA75V

65' Another big save by Courtois

Vinicius Jr. breaks the deadlock with a tidy back-post finish on Madrid's first shot on target.

With all of Liverpool's industry in the opening hour and nothing to show for it, will this be a back-breaker for the English side?

It's been all Liverpool this half, but Madrid were the only of the two teams to put the ball into the back of the net.

Of course it was offside, but it serves as a warning to Jurgen Klopp's side, who have enjoyed most of the play but are susceptible to a quick counter by Benzema and Co.

Still, the stats show that Madrid did not have a single shot on target over the 45 minutes, which is something Liverpool will hang their hats on.

43' Benzema puts the ball in the net, but it's offside

It's going to VAR, but the call on the field is that the Madrid striker was slightly ahead of the second defender when receiving the ball.

It came after Benzema pulled down a lobbed ball into the box and caused mayhem as Liverpool's defenders scrambled to get between him and the net. The ball then fell to another Madrid player who played it back to Benzema, who was in an offside position.

41' Chances piling up for Liverpool

The Reds have had 9 shots (5 on target) so far, compared to Madrid's zero.

Still, the teams are tied where it counts.

Mané gets the best chance so far as he first a low shot that requires a full-stretch stop by the Madrid goalkeeper. Courtois got his fingertips to the ball, just pushing it off the post.

Madrid were lucky that it didn't bounce back into the net as the rebound off the post was a wicked one.

20' Liverpool on the front foot

facebook twitter whatsapp
The Reds have been the better of the sides so far, with most of the play in Madrid's half. The Salah half-chance led to a couple of other shots on target for Liverpool, although both were right at the 'keeper.

16' Salah gets the first shot of the match

facebook twitter whatsapp
It was a little flick from in close after Alexander-Arnold had worked his way into the penalty area. The shot wasn't particularly hard but it required quick reflexes by Madrid goalkeeper Courtois.

facebook twitter whatsapp
The teams seem to be very much in "feeling the match out" mode so far.

The teams are finally coming out for the match