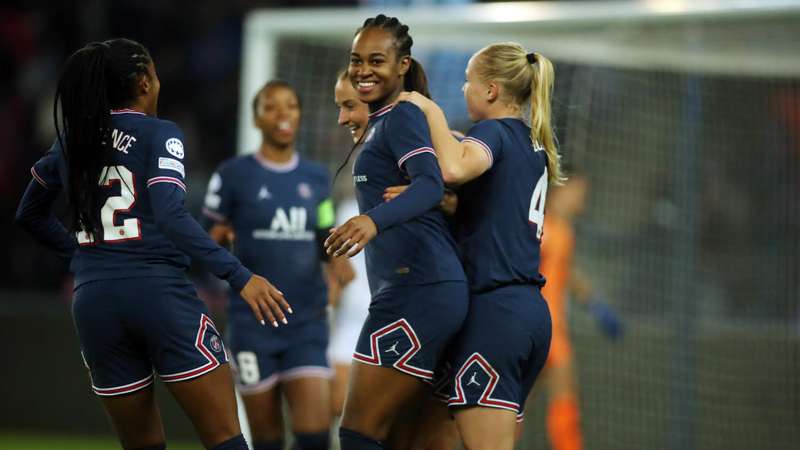 The Parisians weren't troubled throughout the 90 minutes.

Paris Saint-Germain took control of Group B in the 2021-22 UEFA Women's Champions League with a comfortable 4-0 victory over Real Madrid on Tuesday at the Parc des Princes.

Marie-Antoinette Katoto led the way with a pair of goals, with Sara Däbritz adding one and Madrid scoring an own-goal as PSG cruised to victory on Matchday 3 of the competition. The lopsided scoreline may have actually flattered the visitors, who were second-best all night long and only managed three shots over the 90 minutes (zero on target).

The Parisians jumped out to an early lead as Katoto latched onto a Grace Geyoro through-ball in the 13th minute and rounded Madrid goalkeeper Méline Gérard at the top of the penalty area. All that was left was for the PSG forward to slot the ball into the open net, which she calmly did despite some pressure from a Madrid defender.

An early goal helped solidify PSG's control on the match, and long spells of possession resulted for the home side. The dominance eventually paid off again in the 41st minute, with right back Ashley Lawrence flying down the flank with the ball before putting a low pass across the face of goal. The ball took a fortuitous deflection off a defender and directly into the path of Däbritz, who easily tapped home from a couple of yards out.

That run by Ashley Lawrence deserved a goal 🏃💨

The one-sided play continued through the second half as the visitors could hardly gain possession of the ball, and in the 54th minute Katoto registered her second goal of the match with a towering header off a corner kick.

Eleven minutes later, Madrid's misery culminated in an own-goal as a mis-hit clearing attempt by Rocío Gálvez ended up in her team's net.

PSG move into sole possession of first place in Group B with nine points (3-0-0), while Madrid (six points, 2-0-1) drop to second.