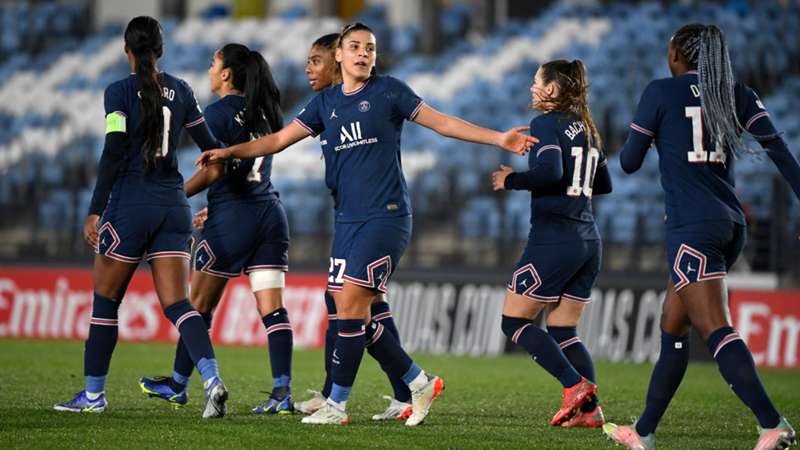 The Parisians have won all four of their UWCL group-stage matches thus far.

Any hope for Real Madrid to exact some revenge for a recent heavy loss to Paris Saint-Germain ended early on Thursday, as the French side prevailed 2-0 on Matchday 4 of the 2021-22 UEFA Women's Champions League.

Last week, the teams also faced off in France, where PSG was dominant en route to a 4-0 victory. However, with the scene shifting to Spain for the reverse fixture, there was hope that the Blancos could use their home-field advantage to find a better result against the Parisians.

Instead, it was more of the same, albeit with a slightly better scoreline, as PSG cruised to their fourth straight victory and a six-point lead atop Group B with two matches remaining.

Marie-Antoinette Katoto opened the scoring just after the half-hour mark, meeting a perfectly-served free-kick by Ramona Bachmann near the penalty spot and hitting a volley past Madrid goalkeeper Misa Rodriguez. Katoto had two goals in last week's win, so Madrid will be glad to no longer have to face the PSG striker for the rest of the group stage.

The hosts weren't mere spectators, though, and they forced a good save out of PSG keeper Stephanie Labbé to keep the visitors ahead early in the second half.

Unfortunately for Madrid, they would never find the equalizer as PSG doubled their lead through Sakina Karchaoui. The left-back struck in the 70th minute after executing a mazy run from the flank before putting a low shot off the goalkeeper's leg and into the net.

From that point onward, it was just a matter of maintaining the status quo for the visiting side. PSG did enough to keep Madrid from truly threatening, and three points were the result.

All three of Thursday's other matches ended in clean sheets for the victors, as Juventus, Chelsea, and Zhytlobud-1 Kharkiv all came away with wins on Matchday 4.

Juve claimed a 2-0 win at Wolfsburg thanks to an own goal and a stoppage-time strike by Andrea Stašková. The result sees the Italians leapfrog their German opponents into second place in Group A.

Meanwhile, Group A leaders Chelsea narrowly overcame a stubborn Servette side 1-0, with Sam Kerr's 67th-minute goal the difference between the clubs.

Group B's bottom teams, Breidablik and Zhytlobud-1, met in Iceland, with the visiting Ukrainians claiming a 2-0 victory. Zhytlobud-1 are now just two points back of Madrid heading into Matchday 5.