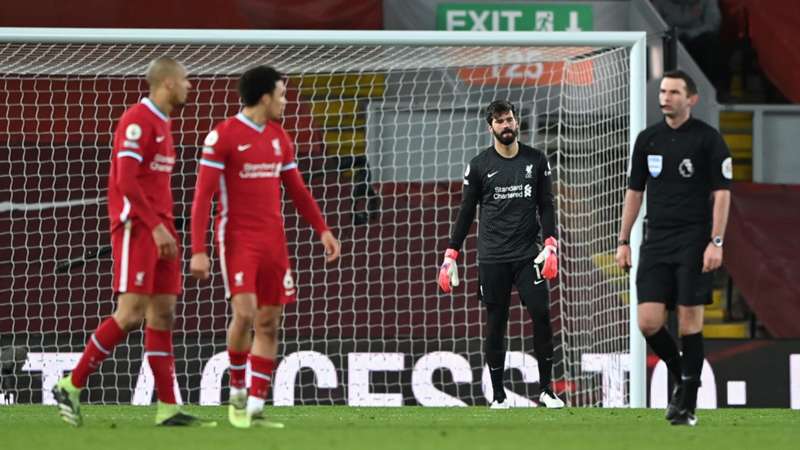 The pundit did not mince words in assessing the Liverpool goalkeeper's disastrous match on Sunday.

Liverpool goalkeeper Alisson will want to forget Sunday's 4-1 loss to Manchester City as quickly as possible.

The 28-year-old was directly responsible for City breaking the match open in the second half as he gifted the ball to the league leaders on two separate occasions — both leading to goals. With the score tied 1-1, Alisson attempted to clear the ball in the 73rd minute but instead kicked it straight at City's Phil Foden, who deftly made his way into the Liverpool area and passed it to a wide-open Ilkay Gundogan for a tap-in.

Three minutes later, it was another misplayed clearance by the Brazilian 'keeper as he gifted the ball to Bernardo Silva, who then chipped the ball across the face of goal and onto the head of an awaiting Raheem Sterling inside the six-yard box.

Within moments a deadlock turned into a rout for City thanks largely to the Alisson gaffes, and Liverpool fell 10 points behind City on the Premier League table.

Alisson is the first Liverpool goalkeeper to make two errors leading to a goal in a game since...

"Well, the goalkeeper's had possibly the worst game that anybody's seen, certainly in the Premier League and for Liverpool," McManaman said on Sky Sports. "[Liverpool] get back into the game, it's 1-1, and then [he] inexplicably just throws — not throws the game away, that's just the wrong words — but puts the game out of Liverpool's reach just with really amateurish mistakes. It was very unlike him."

McManaman even went as far as suggesting that City's fourth goal, a booming strike by Foden that beat Alisson at the near post, was a miscue by the Reds netminder.

"We know [Alisson] missed the last game through some sort of illness, he's back in today, and even for the [fourth] goal — which you don't want to take away from the lovely strike and lovely play from Phil Foden — you're almost thinking that was a mistake by the goalkeeper, as well," he said.

Despite the goalie gaffes, McManaman was sure to point out that City was deserving of the three points based on their play on Sunday.

"People will talk about goalie's mistakes, but Manchester City were the better team," he said.