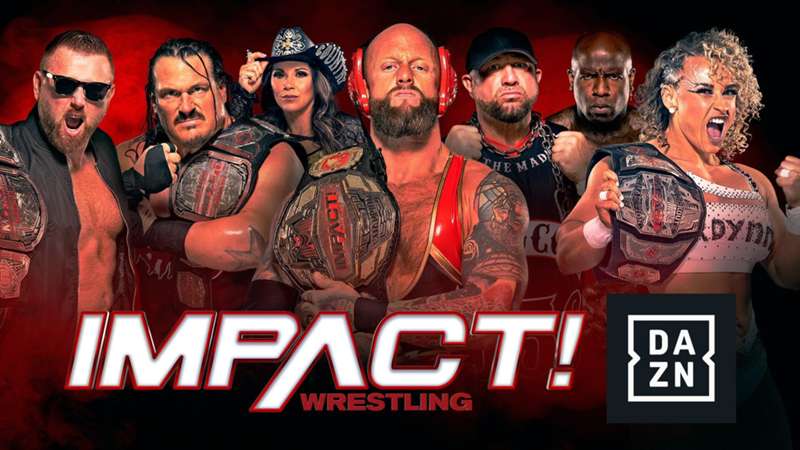 The multi-year agreement will give DAZN viewers in 170+ countries -- including the UK, Ireland, Switzerland, Austria, France, Poland, Spain, Italy, the Netherlands, Japan, and Brazil -- the best seat in the house to IMPACT Wrestling’s weekly IMPACT! flagship series, home to larger-than-life characters, high-stakes matchups and blockbuster drama.

Additionally, DAZN viewers will have access to IMPACT’s high-octane PPV events and premium IMPACT Plus live specials, as well as select titles from IMPACT Wrestling’s archives, directly through the DAZN platform.

“DAZN is a global leader in premier sports programming, and we are proud to partner with them as we expand IMPACT Wrestling’s international reach even further,” said Scott D’Amore, Executive Vice President, Anthem Sports Media Group.

“From the beginning, IMPACT Wrestling has enjoyed a worldwide audience of passionate and knowledgeable fans who crave high-quality professional wrestling content.  With this announcement, we hope to make it even more convenient for them to enjoy our flagship series, premium specials and pay-per-view events, while also introducing the IMPACT Wrestling brand to even more sports enthusiasts across the globe.”

Veronica Diquattro, CEO of DAZN Global Markets said: “We are incredibly excited to sign this multi-year partnership with Impact. This deal will see the promotion’s world-class professional wrestling content arrive on the DAZN platform in more than 170 countries worldwide, reinforcing our growing position as the global home of combat sports.”

Since its inception in 2002, IMPACT Wrestling has established itself as one of the largest professional wrestling organizations in the world and the premier destination for wrestling fans across the globe. Its extensive programming library boasts more than 5,000 hours of content, featuring legendary performers such as Ric Flair, Sting, Kurt Angle, Kevin Nash, AJ Styles, and many more throughout its storied legacy.

In addition to the aforementioned countries, IMPACT Wrestling programming is televised globally in 120 countries including on Anthem properties AXS TV in the US and Fight Network in Canada, as well as the Commonwealth Of Independent States, Latin America, Mexico, the United Kingdom, India and its subcontinent, and Africa.

DAZN Group is one of the fastest growing sports media companies in the world. Headquartered in the UK and with employees in over 25 countries, our businesses touch every aspect of the way fans engage with sports; from production, through to content distribution and commercialisation. DAZN Group is home to DAZN, the leading global sport destination, as well as the popular sport portal, DAZN News.

DAZN is leading the charge to give sports fans around the world access to sports entertainment anytime, anywhere. DAZN is available on most connected devices including smart TVs, set-top boxes, streaming sticks, smartphones, tablets, PCs and game consoles, ensuring that fans have access to ground-breaking rights catalogue and slate of incredible content. Live in more than 200 countries and territories, DAZN can be accessed on Samsung, LG, Sony and Panasonic Smart TVs and on Games Consoles including Playstation and Xbox. Subscribers also have access to DAZN on their Amazon Fire TV, Amazon Fire TV Stick, Google Chromecast and Apple TV and can find the app on their iPhone, iPad, android and mobile.