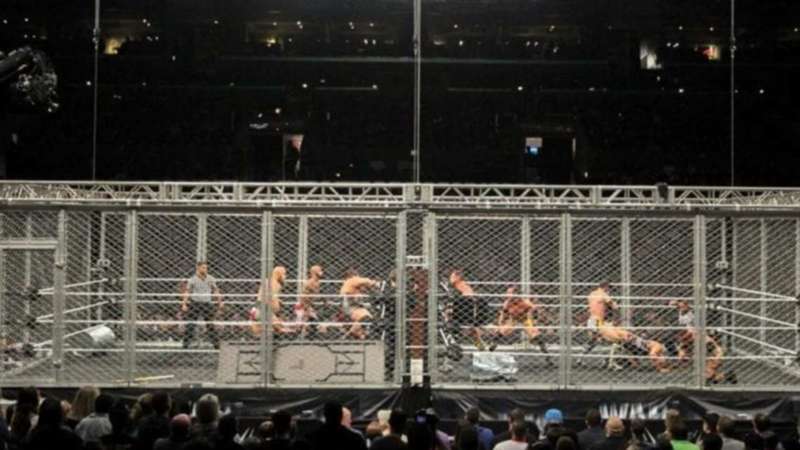 Two teams at odds with one another enter a steel cage that engulfs not one but TWO wrestling rings at intervals and must use their skills, toughness and some military-level strategy to conquer their rivals.

The match was the brainchild of the legendary ‘American Dream’ Dusty Rhodes back in the 1980s, and turned into an annual tradition for the National Wrestling Alliance/Jim Crockett Promotions, and later World Championship Wrestling.

Here’s everything you need to know about the classic stipulation bout.

Traditionally, two evenly-numbered teams will complete against one another, often teams of four or five. Each team has a ‘captain’, who will select their team members in the run-up to the event, though leadership duties can also be assumed by a non-wrestling manager or wrestler in a managerial capacity.

One member from each team will start the match by entering the double cage. Which team member starts, as well as the order of the rest of the team after that, is usually decided by the captain/manager. It will be 1vs1 for the opening period of the match, lasting five minutes. At the 5:00 mark, a new wrestler will enter the cage – but only one.

Whichever of the two teams wins the ‘advantage’ will be able to send in a team member, making the match 2vs1 for two minutes. The advantage can be decided by a coin toss, a match between members of the two sides in the build-up to WarGames, or some other manner.

After that 2:00 period, the other team will send in their second wrestler, evening things back up at 2vs2. After another two minutes, the first team makes it 3vs2, then 3vs3, and so on and so forth with the ‘advantage’ team always going first. Once everybody from both sides has entered the cage, the ‘Match Beyond’ portion of the bout begins.

WarGames: ‘The Match Beyond’

It is not until everybody in the match has entered the cage that the match can actually be won or lost.

At that stage, the ‘Match Beyond’ begins, where the two sides (or given the brutality of the match, what’s left of them) attempt to score a victory. These days, this can be done via pinfall or submission. In the old days, only submission or ‘surrender’ (giving up without being in an actual submission move, similar to some finishes in ‘I Quit’ matches) could end the ‘war’.

It theoretically makes sense for captains to send in their most durable or athletic team member first as their “lead-off”, as they will need to endure the entire duration of the match (and for one team, several numerical disadvantages). There have been numerous occasions where the captain will lead by example and start the match themselves, though many prefer to come in late and “clean-up” as the freshest member.

The “clean-up” member (or “closer”) is often the biggest or hardest-hitting team member who will often also have the biggest issues with stamina or going a long time. They will be in at the start or close to the start of ‘The Match Beyond’ and thus will look to target the most wounded or vulnerable opponent for a swift finish.

If a regular tag team is part of a WarGames match, the captain will often ensure they are next to each other in the order, so as to take full advantage of their teamwork. With several WarGames teams throughout history being thrown together in pursuit of a common enemy, this sort of camaraderie is extremely valuable during the early stages of the match.

The first WarGames match took place at The Omni in Atlanta during the NWA’s Great American Bash ’87 tour when Dusty Rhodes sought a new grudge match that could involve the entire villainous Four Horsemen stable going up against all of their heroic foils at that time.

Rhodes, Nikita Koloff, The Road Warriors and the Warriors’ manager Paul Ellering won the first WarGames vs Horsemen representatives Ric Flair, Arn Anderson, Tully Blanchard, Lex Luger and manager JJ Dillon. Due to the nature of the business at the time and live gate receipts being king, the company ran the match back three more times that summer, with slight changes to the line-ups each time.

1988 and 1989 also saw multiple WarGames matches, with the 1989 Great American Bash hosting the first PPV edition of the score-settler. The match then disappeared until 1991, when Four Horsemen Flair, Anderson, Larry Zbyszko and Sid Vicious became the first ‘heel’ side to win WarGames against Sting, The Steiner Brothers and Brian Pillman at Wrestlewar ’91.

The Wrestlewar ’92 edition, which saw Sting’s Squadron overcome The Dangerous Alliance, is regarded by many as World Championship Wrestling’s greatest ever in-ring effort following the full-on transition from NWA/JCP to WCW. After that, the match became synonymous with September PPV Fall Brawl – but memorable showings were far less frequent.

From 1993 to 1997, WarGames ranged from okay (The Rhodes family and the Nasty Boys getting revenge on the Stud Stable in ’94 was decent enough) to embarrassing (Hulk Hogan and friends vs Dungeon of Doom in ’95 – ’nuff said). Storylines often overtook the action, particular during the New World Order years of ’96 and ’97. And while the WCW babyfaces doubting Sting and Curt Hennig’s heel turn on the Horsemen were seminal moments, years of toned-down and blood-free action combined with the Order’s reluctance to ever get their comeuppance hindered things.

In 1998 and 2000, WCW produced two confusing and at-times embarrassing modified WarGames matches before being bought by WWE in 2001, who declined to use the concept until 2017. And the matter of tweaking a winning formula is something that has dented the double cage more than having a Horseman vaulted head-first into the mesh ever could.

Outside of switching between 4vs4 and 5vs5 or forcing non-wrestling managers to participate, the match stuck to a clear pattern for much of its initial run from NWA to WCW. However, in 1998 things got weird.

No longer two teams facing off, this time the Fall Brawl ’98 main event included three teams of three: nWo’s Wolfpac stable, nWo’s Hollywood stable and a WCW team battled in a baffling mess where only one member from one team could win and earn a WCW World title match. This led to ‘team-mates’ attacking one another and everybody watching trying to keep up with what was going on – especially when The Ultimate Warrior showed up via a myriad of ‘magic’ entrances to haunt Hollywood Hogan.

This led to 1999 becoming the first year since 1990 not to see a WarGames match. In 2000, however, Vince Russo dusted off the name for a random Nitro in an effort to quick-fix the ratings that were again plummeting on his watch. And yes, literally just the name ‘WarGames’ and nothing else.

This time, the usual double-cage was replaced by the ‘Ready To Rumble’ triple cage seen earlier that year in the titular wrestling movie as well as the Slamboree 2000 main event. And while that cage was a tremendous physical structure, the WarGames booked inside it was not.

A team of ‘babyfaces’ and a team of Russo’s villainous henchmen battled against each other, but also against men who failed to qualify earlier in the night but showed up anyway, but also against each other because the goal was for one person to climb to the cage’s summit and retrieve Kevin Nash’s WCW World title, but also they had to bring the belt down to the bottom and exit the cage to be declared the champion. Got all that? Smashing.

Of course, it was all a Russo “swerve” where the heels pretended to be mad at him for putting Nash’s belt at stake in such a ludicrous manner, but the power of the swerve was apparently too much for the company’s top heroes to overcome. Either that, or they had an aneurysm trying to keep up with the match objective.

With that last effort, it’s easy to understand why WWE didn’t see the value in using something that wasn’t Vince McMahon’s own creation. They did, however, use a little inspiration from WarGames to create the Elimination Chamber, which went on to become a truly enjoyable way to have an ‘every man/woman for themselves’ take on the WarGames ‘feel’.

Independents such as Major League Wrestling would ‘borrow’ WarGames in the early 2000s before WWE firmed up on copyrights. But it was NWA: TNA that would come closest to bringing WarGames back in its true glory on national level, and it was fitting that the National Wrestling Alliance and Dusty Rhodes were linked.

At the debut of their polarising PPV concept Lockdown in 2005, where every match was held inside a steel cage, the first ‘Lethal Lockdown’ match had a 3vs3 WarGames-style set-up as the match started as 1vs1 and team members joined at intervals. Diamond Dallas Page, BG James and Sean Waltman defeated Jeff Jarrett, Kip James and Monty Brown on the night, but it was a year later that Lethal Lockdown found its feet.

Sting, the wrestler most synonymous with captaining a babyface WarGames team, rallied a squad to get revenge on Jeff Jarrett and his troops for continually harassing him after he attempted to retire. The Stinger demanded that the cage roof seen on classic WarGames bouts return – but only when the ‘Match Beyond’ period began, and with a host of various weapons attached!

This modification of WarGames became what many thought of when they thought of TNA Lethal Lockdown matches. And because it kept the basic foundations of WarGames while adding just the right amount of raised stakes, it worked a charm once a year for the next decade, with second editions in 2009, 2010, 2013 and 2016.

As TNA/Impact entered an ugly transitional period in 2016 and 2017 via several court meetings, it was then that Triple H finally managed to convince McMahon to green-light the return of the WarGames name for the red-hot NXT brand.

Opting against the iconic but at-times dangerous roof and allowing the Match Beyond to end by pinfall as well as submission were two of the modifications made that didn’t hinder too much. Teams in NXT are even threatened with immediate disqualification if they escape the roofless structure, which we can only hope is a rule that is never actually utilised just for the sake of it.

However, WarGames’ big return – pitting the UE against Sanity against Roderick Strong and the Authors of Pain – actually brought back Fall Brawl ’98’s ill-advised three-team format. Thankfully, it truly was victory for one entire team – the Era, in this case – and the bout was enjoyable as a result.

It was a traditional 4vs4 format in 2018 and 2019 and the WarGames matches got even better from there, with the other significant tweak made by WWE – requiring team members to be held inside smaller cages until they are allowed to enter the match – even coming into play in a clever manner more than once. For the 2019 edition, two WarGames matches took place on the same night, including the first-ever all-female edition. That bout was critically-acclaimed and served as a starmaking performance for Rhea Ripley.

The spectacle has now finally been upgraded to main WWE shows and will headline this weekend's Survivor Series premium live event. A once-beloved concept via multi-person elimination tags, Survivor Series has lost its identity in recent years and WarGames could be just the thing to return it to the same degree of significance as WrestleMania, The Royal Rumble and SummerSlam.

Meanwhile, All Elite Wrestling did, after a pandemic-forced delay, finally introduce their own version. Named Blood and Guts due to the trademark now belonging to WWE, it nonetheless attempts to follow the traditional format of the early days, including plenty of the titular bleeding for less TV-PG but undoubtedly gripping grudge clashes.