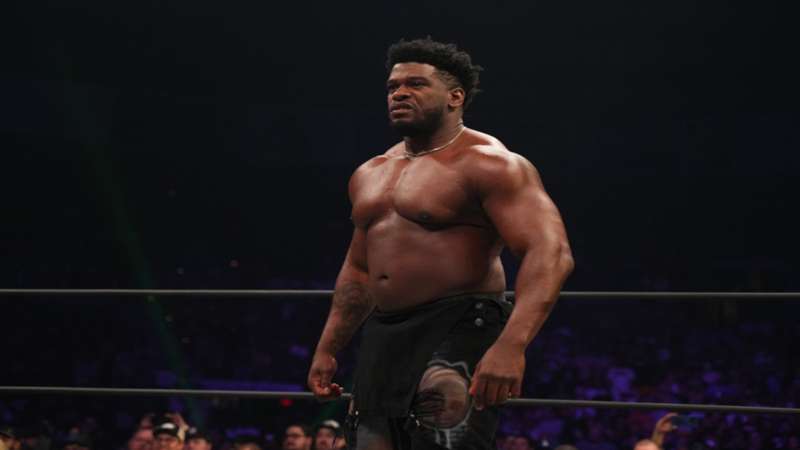 Will Hobbs is feeling better than ever heading into Sunday's Double or Nothing event.

Will Hobbs had been on the independent circuit for over a decade looking for his big break. He has everything you need to become a success in pro wrestling. He possesses the look and the charisma to be a significant player.

The opportunity came in the summer of 2020 when Hobbs appeared on All Elite Wrestling's YouTube show, AEW Dark. But it was the 2020 edition of the All Out event where Hobbs shined in the 21-person Casino Royale battle royal. His performance jumped off the page and made AEW Owner and CEO Tony Khan take notice and signed him to a contract. From there, Hobbs bulldozed his way through the competition to align with the stable Team Taz, led by pro wrestling legend Taz. The group consists of Taz, Hobbs, FTW champion Ricky Starks and Hook.

Hobbs jumps off the TV screen when you are watching him at home or inside the arena watching AEW because of his bulky 6'1" 270-pound frame. Something felt off though that wasn't getting the California native to the next level.

Enter wrestling legend Mark Henry, who debuted in AEW at the 2021 edition of Double or Nothing. Henry and Hobbs became kindred spirits almost immediately. The relationship has made Hobbs a better performer which has resulted in him competing in his first-ever AEW title match on pay-per-view as he teams with Starks at Sunday's Double or Nothing event from the sold-out T-Mobile Arena in Las Vegas against Keith Lee and Swerve Strickland and AEW Tag Team Champions Jungle Boy and Luchasaurus.

"Huge," Hobbs told DAZN of Henry's influence on him.

"You can tell the difference in the mannerisms, the way my attitude is in the ring. Probably the first match you noticed a huge difference from when he came in was when I worked at CM Punk last year. You could see some of the old-school Mark Henry. Hall of Pain in that match."

Punk, who headlines this weekend's show against AEW World Champion "Hangman" Adam Page, returned to pro wrestling in August after a seven-year exodus after leaving and subsequently being fired by WWE in 2014. He'd only had one match leading into his battle with Hobbs on September 22 at the sold-out crowd of 20,177 at Arthur Ashe Stadium in Flushing, New York, the home of tennis' US Open. The crowd is the largest in AEW history.

Hobbs was nervous heading into the biggest match of his life. A lot was on his mind. His mother had passed away about a month earlier.

"'Your mom is in the crowd," Hobbs told ESPN recently on what Punk said to him before the match.

"Let's put the match on for her.' That made me feel so much better, so much more comfortable with him in the ring."

Punk beat Hobbs on that evening. It was a very solid match that exceeded expectations from fans and pundits.

"It let me know that I was valued in this company," Hobbs explained.

"You had guys with more tenure on this roster that may be or could have been in that spot, but I was chosen to be in that spot. Why? Because I'm valued. There's some type of stock in this dude. Plus, I don't think there's anyone badder than me. Why not give it to me? Why not showcase what I can do? So after that match or even before that match was announced, my confidence was up."

Hobbs' trajectory has skyrocketed from that point forward. He and Starks have formed a dynamic tag team that has led to a No. 2 ranking in the division. In addition, the duo hasn't suffered a defeat in nearly 18 months. That recipe makes "Powerhouse" believe they leave "Sin City" with tag team gold around their waist.

"You got three great teams in there," Hobbs said.

"We already beat Swerve and Keith. Ricky’s already beat Jungle Boy and Swerve. You can throw Luchsaurus in the mix. Is that going to help? I don't think so. But you look at stats and put it on paper, and if you're a betting man, you see that Ricky Starks and I are the absolute favorites to win this match and walk out the new AEW World Tag Team Champions."