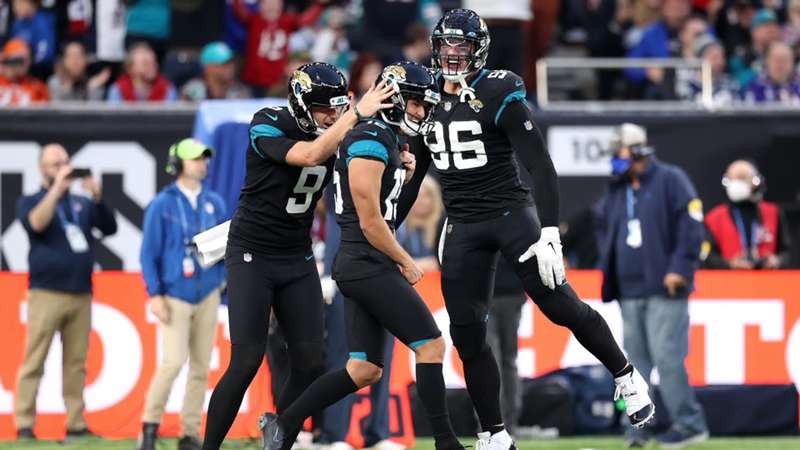 The final kick of the game was the decisive one.

The Jacksonville Jaguars might want to start playing all of their home games in London.

Riding a 20-game losing streak into their "home" game against the Miami Dolphins at Tottenham Hotspur Stadium on Sunday, it was anybody's guess as to when the Jaguars would be able to finally add a "W" to their results. Even with the Dolphins struggling to a 1-4 record ahead of Sunday's game, Miami was still seen as the favourite against a hapless Jags team that hadn't tasted victory since Week 1 of the 2020 season — a 27-20 win over the Indianapolis Colts with Gardner Minshew at quarterback and Doug Marrone as head coach.

Neither of those men are still with the team, of course — highly touted rookie Trevor Lawrence is now the Jags' No. 1 at QB under head coach Urban Meyer — but the star of Sunday's game for Jacksonville was kicker Matthew Wright, who was signed a day earlier after having played the previous two games as a member of the practice squad.

The Jaguars were trailing late, and seemingly headed for another loss. However, Lawrence was able to get his team into field goal range, barely, and Wright launched a 54-yard attempt that seemed destined to sail wide before curling back between the uprights to tie the game at 20-20 with 3:45 left.

HE HOOKED IT IN!@Jaguars tie it up with a WILD 54-yard field goal. #DUUUVAL

That wasn't the end of Wright's heroics, as the 25-year-old would take centre stage after Meyer and Lawrence constructed a smart drive to get the Jags within the same range as the kicker's earlier successful attempt. Following a quick nine-yard gain off a short Lawrence pass to Laviska Shenault Jr., Jacksonville had the ball on Miami's 35-yard line with exactly a second left on the clock.

With a short run-up, Wright booted the ball 53 yards and through the uprights — this time kicking it straight between the middle of the poles rather than adding any unnecessary swerve to his attempt.

With one swing of his foot, Wright ended the second-longest losing streak in NFL history. The Tampa Bay Buccaneers' record 26-game skid from the late 1970s is once again safe.